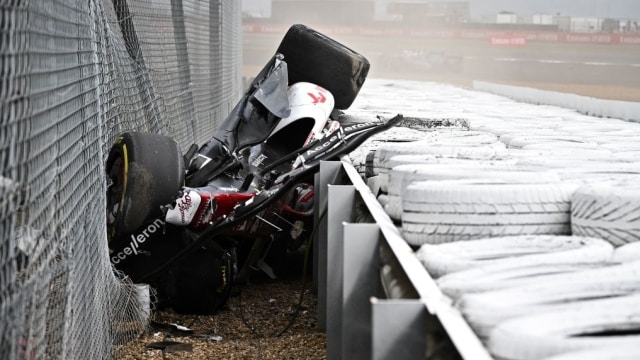 Two drivers crashed at the start of the British Grand Prix at round 10 of the Formula 1 championship.
On Sunday, Thailand’s Alexander Albon (Williams) and China’s Zhou Guanyu (Alfa Romeo) got crashed. Fortunately, both didn’t get any serious injury.
The two drivers were checked at the medical center at the Silverstone circuit. Federation Internationale de l’Automobile (FIA) confirmed that.
Albon was taken by helicopter to Coventry Hospital for precautionary examinations. Zhou is currently under observation.
Later in the afternoon, the FIA said Zhou was in good condition and has left the medical center.

I’m ok, all clear. Halo saved me today. Thanks everyone for your kind messages! pic.twitter.com/OylxoJC4M0

As a result of this accident, the race was interrupted before a new start.
According to the images of the accident, the single-seaters of Pierre Gasly (AlphaTauri), George Russell (Mercedes), and Zhou Guanyu (Alfa-Romeo) came into contact as they approached the first corner.
Zhou Guanyu’s car turned around to finish its race on the other side of the safety barriers. It was against the fences separating the track from the spectators.
Albon and Frenchman Esteban Ocon (Alpine) were also indirectly involved in the crash. Williams was sent against the barriers as it tried to slow down.