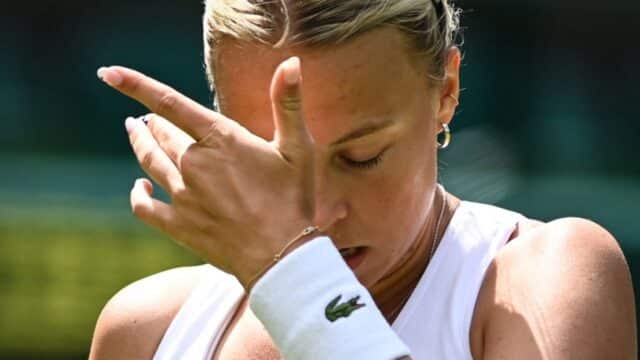 Estonia’s Anett Kontaveit, world No. 3, was swept 6-4, 6-0 in the 2nd round Wednesday at Wimbledon.
She lost to Germany’s Jule Niemeier (97th). Jule is competing in her second Grand Slam tournament this time.
At 26 years old, Kontaveit has never made it past the 3rd round of the Grass Major reached in 2017, 2018, and 2019. Last year, she lost in the first round.
Niemeier had never faced a top-10 player before. She will probably face Ukraine’s Anhelina Kalinina (34th). Or it could be her compatriot Lesia Tsurenko (101st) to reach the 3rd round.
At 22, Niemeier played her first Major this year at Roland Garros where she lost in the first round.

Raducanu also fell in the 2nd round

Britain’s Emma Raducanu is 11th in the world ranking and winner of the last US Open. She was eliminated 6-3, 6-3 in the second round by France’s Caroline Garcia (55th).
Raducanu had revealed herself last year on the London grass. She reached the 8th final, while she was ranked 338th in the world before the tournament. She had never won a single match on the circuit.
She had notably beaten Marketa Vondrousova, a finalist of Roland-Garros a few weeks earlier. Raducanu was forced to abandon in 8th against the Australian Ajla Tomljanovic. Then she was caught up in stress and suffered from breathing difficulties.
By the end of the summer, she went on to win the US Open by coming out of qualifying and losing a set. But since then, the young Briton has struggled to confirm.
Garcia won the eighth title of his career in Bad Homburg last week. It lined up a seventh straight victory, something that had not happened to her since the 2019 grass season.
“We must remain humble, tennis is a perpetual restart,” said the Lyonnaise who had not won a match at Wimbledon since her 8th final in 2017.
“I had prepared very well for this match. Emma is very strong and she has already shown that she can play very well in big events.
She was supported by the public, “commented the 28-year-old Frenchwoman. She had lost their previous and only meeting, in the spring in Indian Wells.
In the next round, Garcia will face China’s Shuai Zhang (41st). Aside from a quarterfinal in 2019, Shuai had never made it past the first round at Wimbledon.
Against Raducanu, Garcia played from the start with a lot of aggressiveness. From the outset, she broke to lead 2-0. But the Briton immediately rebounded.
The Frenchwoman again took Raducanu’s serve to lead 4-2. This time she retained her advantage to pocket the first set.
In the second, Raducanu managed to erase Garcia’s first break. But Garcia managed the decisive break to lead 4-3 and win the match.