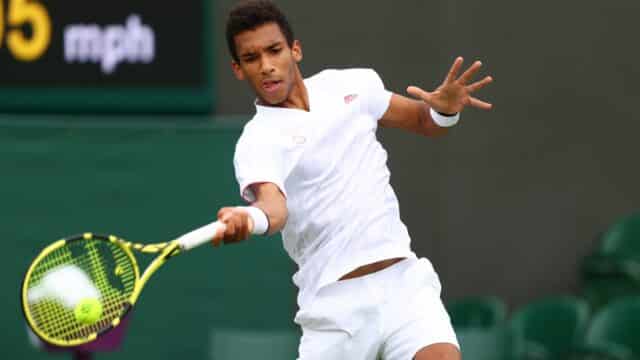 Three Canadian rackets will begin their journey at Wimbledon on Tuesday morning:
Felix Auger-Aliassime (6) vs. Maxime Cressy, circa 9:15 a.m.
D. Shapovalov (13) vs. A. Rinderknech, circa 10:30 a.m.
Bianca Andreescu vs. E. Bektas, not before noon
Felix Auger-Aliassime will face the American Maxime Cressy (45) at the start.
This is the first duel between the two players. Auger-Aliassime will try to continue his positive streak in the majors. Having reached the quarterfinals in his last four Grand Slam tournament appearances.
In his last five clashes, Denis Shapovalov will try to break a five-game losing streak. The 16th World racket will cross swords with the Frenchman Arthur Rinderknech (62).
Last year, Shapo was defeated in the semi-finals of the London tournament against none other than Novak Djokovic. (The defending champion)
As for Bianca Andreescu, she is just a finalist in the Bad Homburg tournament against Carolina Garcia.
Emina Bektas (85) will be ahead of her in the first round. Andreescu is still looking for a first career victory on the grass of Wimbledon.
Related
Tel Aviv Open 2022: Players, Men's Draw, Schedule, Prize Money, Where to Watch