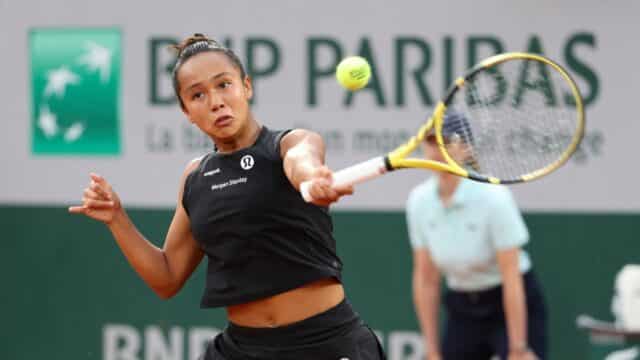 Three Canadians are still in contention at Roland Garros, and they will be in action in the second round on Wednesday.

Ontario’s Bianca Andreescu will face Switzerland’s Belinda Bencic, the 14th seed, around 10 a.m. on the main court. In contrast, Laval’s Leylah Fernandez, No. 17, will face Czech Katerina Siniakova at about the same time.

If they win, the two Canadians could face each other in the third round.

Leylah’s father and coach, Jorge, said the two-day break since the first-round win over France’s Kristina Mladenovic on Sunday was hard to deal with.

“It’s very difficult because you want to keep a certain pace. We trained to fine-tune some things compared to the first game, but it’s hard to adjust to that,” he told TSN on the eve of the duel.

“I know the next opponent, and she will fight relentlessly on every point. She has already beaten big names in the past, and she is perfect on clay in singles even if she is a doubles specialist (Siniakova is currently 1st in the world, Editor’s note).

Nothing is taken for granted. You have to approach it as if you’re facing No. 1.

On the men’s side, Felix Auger-Aliassime, 9th seed, will face a player from the qualifiers in Argentina’s Camilo Ugo Carabelli at 5 a.m.

His compatriot from the maple leaf Denis Shapovalov was eliminated in the first round yesterday.

Among the headliners also on the schedule, it will be Rafael Nadal’s turn to play in the evening on Centre Court against local player Corentin Moutet, while Novak Djokovic will play on the Suzanne-Lenglen against Alex Molcan.