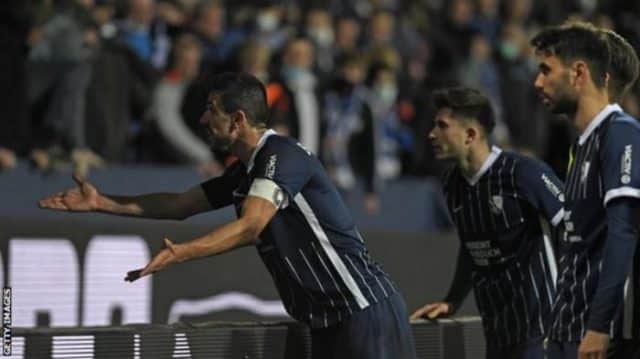 The Bundesliga match between VfL Bochum and Borussia Mönchengladbach is canceled after a cup throw at the assistant referee. The reactions are clear.

Nobody wants to see that!

The cup throwing scandal at the match between VfL Bochum and Borussia Mönchengladbach shakes the Bundesliga.

What had happened? Linesman Christian Gittelmann was hit in the head by a full beer cup at the score of 2:0 for Gladbacher.

The game was initially only interrupted, then completely canceled after consultations. Referee Benjamin Cortus accompanied his assistant off the field.

Not only the fans were stunned immediately after the action, but Bochum keeper Manuel Riemann and his teammates also showed their appendix with clear words what they thought of this action.

Even after the game, the protagonists found clear words. Former Thorsten Kinhöfer commented on the situation at media, describing the demolition as “without alternative”.

“First and foremost, you have to apologize for the incident in all forms. We wish the affected lineman all the best and that he recovers well.

But it’s a pity when you can play in front of 25,000 spectators again for the first time, and the game didn’t have a sporting outcome.”

“This is unacceptable and sad that it ends like this. It is not the case in Bochum that we can condemn a whole group. This is not representative of the fans of VFL Bochum. But no matter where it came from, it must not happen.”

“We had hoped to get the spectators back into the stadium as soon as possible. It can be assumed that there will be consequences.”

Related
What is a Nutmeg in Soccer?

“Sadly, it has to end like this; it hasn’t lost anything on a football pitch. It has already been discussed (among the players, editor’s note) that you do not feel safe and that this is a bitter pill. I hope that doesn’t do too much and that the referee is okay again.”

“No one wants a football match to end like this. It was assumed that it would be canceled. That doesn’t make a good picture; that doesn’t belong. The atmosphere was good, cool vibe, a good audience. It annoys me that it ends like this. Whether it was an individual, we have to take care of each other; something like that must not happen.”

“We have to apologize in all forms; this is just embarrassing and must not happen. It is also completely understandable to accept if you do not want to continue the game under these circumstances. We were also good in the game and again despite the 0:2. You could have torn today and taken it with you. There was also frustration among the players.”

“We, VfL Bochum, have been writing an incredible story for almost two years. This action is disrespectful to all those who tear their asses open every day to experience this journey! Not to mention the linesman! YOU have lost nothing in the stadium.”