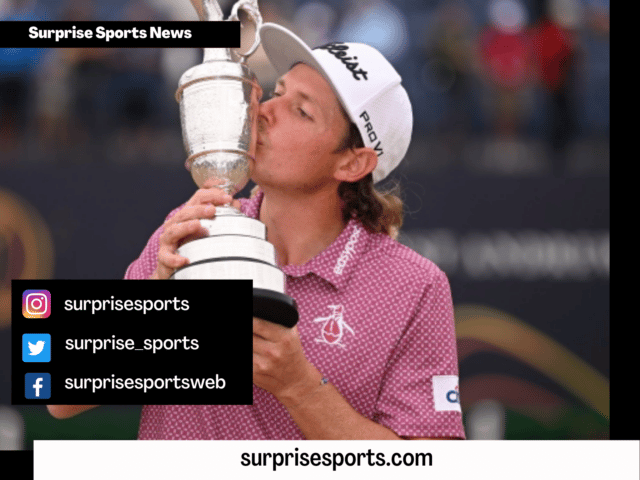 Australia’s Cameron Smith stormed the aisles of the Old Course at Royal & Ancien St. Andrews. He wins the 150th edition of the British Open and its first major with a brilliant final round.
While the table was set to allow McIlroy to end an eight-year drought in major tournaments. The Northern Irishman started the day in the lead at minus-16.
He tied with Norway’s Viktor Hovland, four shots ahead of Smith and American Cameron Young. It was rather Smith who stole the show, handing over a final card of 64 (minus-8) to conclude with a cumulative score of 268, 20 shots below normal.
He topped the entire field, including six birdies on his last nine holes, including five consecutive to start his comeback nine.
The winner of the 30 editions of the Open at St. Andrews has never achieved a score lower than 64 in the final round.
When McIlroy missed his second shot in the 18th, a ten-yard shot he had to stall to cause overtime. Smith came out of the scoring box to hug his youngest.
McIlroy played a final 70, finishing third at minus-18. Young carded a 65, including an eagle in the 18th, to sneak between Smith and McIlroy at minus-19.
Smith, the 88th different winner of the British Open, saved par by 10 feet on the same 17th before finding himself on the front of the green with his tee shot in the 18th.
From a distance of 80 feet, his roll was almost perfect. It left him only a formality to fill in to inscribe his name on the Claret Jug.
Even with the trophy in his hands, he still had difficulty believing it.

“All these names on this trophy are all players at the top of their game who have won this tournament,” he said. It’s pretty ‘cool’ to find your own. I don’t realize it yet. I think it will take a few weeks. It’s completely surreal.

McIlroy didn’t play a bad round with two birdies and 16 pars. But he didn’t make the shots that would have allowed him to bring back the trophy.
He was not able to stall a roll at the beginning of the course and was not able to hit the ball close enough to the cup using his tee shot in the 18th.
His last good opportunity was a fifteen-foot birdie attempt in the 17th. He narrowly missed on the left.
“My straight iron has completely cooled,” McIlroy said. When the two Camerons, especially Smith, threw their second-nine all fire, I had to draw from the depths of my resources to make birdies. And I just couldn’t do it.
“I got beaten by the best player this week. To play 64 to bring the British Open back to St. Andrews. It’s quite a performance. I tip my hat to him.
Hovland, who was trying to become the first Norwegian to win a major, carded a 74 to finish tied for fourth at minus-14 with England’s Tommy Fleetwood (67).
For the Canadiens, Corey Conners shot 67 to finish at minus-8. Mackenzie Hughes did not take part in the two rounds of the weekend.
Smith’s third win this season was his first since the Players’ Championship win. He rose to second place in the world, behind masters winner Scottie Scheffler.
He is the first Australian to win the British Open since Greg Norman at Royal St. George’s in 1993. Due to his Saudi-funded LIV series, Norman has been asked not to show up this year.
No one thought about it at the end of the day, which belonged to Smith and his smoking straight iron.

Filippo Celli handed over a card of 71. A shot under par, in this final round, ensured he received the silver medal awarded to the best amateur golfer.
The 21-year-old Italian wrapped up his work week after playing 283 shots. Five less than normal and six shots ahead of Aaron Jarvis.
Celli started the day at minus-4 but committed bogeys on two of the first three holes. However, he got back on track with an eagle in the 14th, a par-5. Almost calling for an eagle on the 18th after a bogey on the 17th, he made a birdie on the 18th.
People Also Read: Cameron Smith 2022: Net Worth, Earnings, Wife