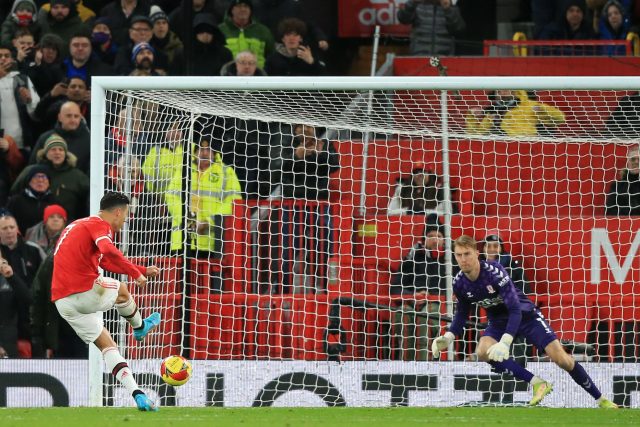 Cristiano Ronaldo is the biggest name in football. Every single team is afraid of him. He has a legacy that he can lead a team to its victory on his own. And in the past, Ronaldo proved himself many times.

Today is the birthday of this legend. And he had an opportunity to make his 37 birthday more colorful. He got that chance on his birthday night while playing against Middlesbrough.

It was the fourth-round match of the FA Cup, Manchester United vs Middlesbrough. Man United hosted the game for Middlesbrough in their field. So, all the odds and facts were on the United side. And Middlesbrough is the middle-class team. They had never a good chance to win the game against the Red Devil. Though Chris Wilder trained his boys very well to fight in the Old Trafford fort.

If you saw the game then you know that Wilder training didn’t prevent the attack English Giants. And CR7’s team continued their attack in the Middlesbrough goal post. The calculation says United was in control of the ball for 70% and Middlesbrough was in for 30%.

Yet, last night luck was 100% on the side of Middlesbrough. Ralf Rangnick’s team missed all the shots and opportunity to put the ball inside of the Middlesbrough goal post. After the match, Rangnick stated that if anyone is to blame for the loss of MANU in the FA Cup then it’s only MANU.

After the first 20 minutes, Boro defender Anfernee Dijksteel fouled Pogba in United’s penalty box. And the referee gave Red Devil a penalty shot. And obviously, Ronaldo was there to make the shot. But unfortunately, he missed the penalty. It was really unlike of him cause Ronaldo never miss a penalty.

Ronaldo’s and MANU’s fans were completely shocked after seeing this. But Middlesbrough 9000+ fans shouted after witnessing the CR7 miss. This miss brings a lot of memes and shame on the birthday of CR7. Some fans started to call him “Penaldo”.

Manchester United vs Middlesbrough rest of the match review:

Even MANU lost a big chance to take them forward, they soon fulfill the gap. Just after the five minutes of Ronaldo’s penalty miss, Jadon Sancho took a pass from Bruno Fernandes and put the ball inside Boro’s goal post.

MANU was ahead of Boro in the first half all the time. But in the second half, Middlesbrough managed to bring the game in the same position. In the 64 minutes, Matt Crooks made a goal. They let the MANU know one goal is never safe to win the match. In the tiebreaker, Boro made all the goals into the Red Devil’s pocket. But the English player Anthony Elanga shot at the goal bar. After the two penalties, miss MANU had to give up their dreams to win the FA Cup. Loss of Ronaldo’s was surely a treat from him to the Boro’s fans.