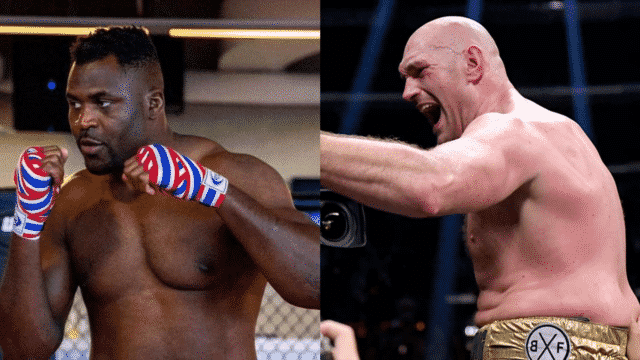 This is bad news for Francis Ngannou, who has confirmed that he will not re-sign with the UFC if he cannot fight Tyson Fury… Indeed, Dana White seems deaf to her calling.

Ngannou has been talking about boxing for months now, and Tyson Fury, for his part, also has this common interest in facing the Predator. Fury even set a date: early 2023.

But, unless he is no longer part of the UFC roster, Ngannou must have the green light from the promotion and its president Dana White, who does not want to hear about this fight:

They’re stupid, fuck***! It’s a waste of time, energy, and money. I mean, listen, it’s stupid, but I understand.

Dana White doesn’t want this kind of fight, even though he let Conor McGregor do it against Mayweather, and he thinks it won’t go well for Francis Ngannou because Tyson Fury is arguably one of the best boxers of all time:

Boxing is a huge advantage for Tyson Fury. Ngannou just fought against Ciryl Gane. If you know anything about combat, it’s a silly conversation, and it’s an absolutely silly conversation… They talked about it and everything, but I mean, guys, Fury is the best boxer, one of the greatest boxers of all time.

You look at the guys he beat and the ease with which he beats them. I don’t know; we’ll see how all this plays out. I don’t like cross-fights. I don’t like them.

Still, this fight could be huge and bring money to the UFC, depending on the conditions. It would also please Ngannou and renew ties with the promotion.

All that remains is to wait for Francis Ngannou to come back from injury, and then we will have the answers to all these questions.

Do you think Dana White is right not to want the fight between Ngannou and Fury?