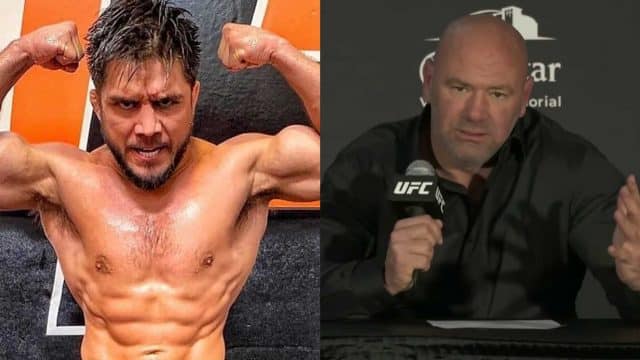 Dana White recently reacted to Henry Cejudo’s announced return to the UFC and his request to fight Conor McGregor.

Henry Cejudo has just announced that he will make his return to the competition.

He immediately proposed to Conor McGregor to organize a fight against him as soon as possible so that they settle their accounts.

Henry Cejudo did not stop at this simple proposal to fight at “The Notorious”; he later proposed to Alexander Volkanovski a fight in Australia. The least we can say is that Triple C seems determined to find an opponent.

But the method used by Cejudo to get into fights does not seem at all to the taste of Dana White, who was quick to react. Asked about the possible holding of a fight between Cejudo and McGregor, Dana White went straight to the point (via TMZ Sports):

“No, it will not take place. Cejudo has retired, right? You know very well that Cejudo knows what he has to do to come back and get anything. Saying anything on Instagram doesn’t give you fights or the right to have them.

The UFC boss has been clear and crisp. Henry Cejudo, if he wants to come back, will have to prove himself and show that he is (again) at the level expected in the UFC.

Without it, Dana White has closed the door to all other eventualities, even questioning her possible return to the Octagon.

What do you think of this statement by Dana White?