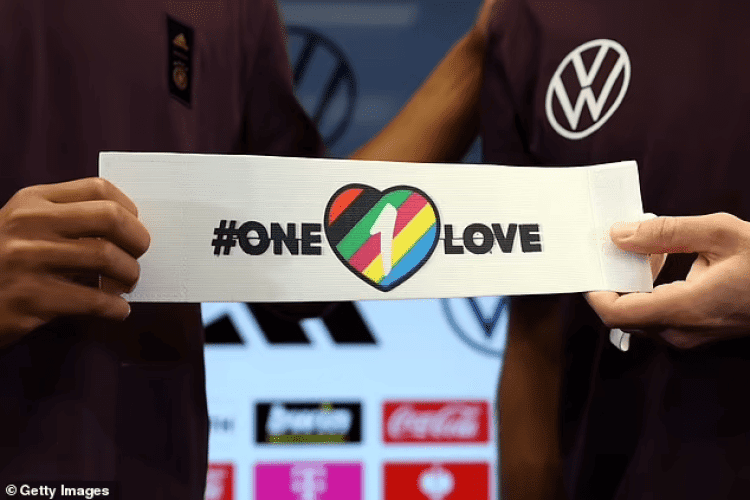 England, Wales, Belgium, Switzerland, Germany, Denmark and The Netherlands are banned by FIFA from wearing One Love armbands at the World Cup.

One Love armband wearers in the Qatar World Cup run the risk of receiving a booking for violating FIFA equipment regulations prior to the game.

Harry Kane of England, Gareth Bale of Wales, and Manuel Neuer of Germany were among the captains of nine European countries who planned to wear the One Love armbands to promote inclusivity and LGBTQ+ rights in Qatar.

The armband was suggested by the UEFA Working Group in support of inclusiveness and diversity. It featured a “heart containing colors emblematic of various backgrounds.”

In Qatar, same-sex relationships are forbidden.

After learning that captains who wore the armband would be subject to punishment in the form of a yellow card, it was decided not to do so.

The English FA claimed in a statement announcing the choice that they had contacted FIFA in September to inform them of their plan to wear the armband but had not heard back from them.

FIFA announced on Monday that its “No Discrimination” campaign would now begin at the group stages instead of the quarterfinals as originally intended.

The One Love armbands may be considered unofficial attire, and players wearing them may be fined or given yellow cards.

The statement also said that, in accordance with FIFA regulations, captains’ armbands would give participating teams message opportunities for the campaign, “the captain of each team must wear the captain’s armband provided by FIFA.”

Before a combined declaration from the Football Associations of England, Wales, Belgium, Denmark, Germany, The Netherlands, and Switzerland, the Dutch FA, who started the campaign before Euro 2020, said so first.

The Football Supporters’ Association declared its “contempt” at FIFA following the announcement.

“Never again should a World Cup be handed out solely on the basis of money and infrastructure,” read the statement.”

“No country which falls short on LGBT+ rights, women’s rights, worker’s rights or any other universal human right should be given the honour of hosting a World Cup.”

What Did FIFA Say?

In regards to the update on the usage of the supposed “One Love” Armband, here is full statement from FIFA below:

“We were prepared to pay fines that would normally apply to breaches of kit regulations and had a strong commitment to wearing the armband. However, we cannot put our players in the situation where they might be booked or even forced to leave the field of play.”

“We are very frustrated by the FIFA decision which we believe is unprecedented – we wrote to FIFA in September informing them of our wish to wear the One Love armband to actively support inclusion in football, and had no response.”

“Our players and coaches are disappointed – they are strong supporters of inclusion and will show support in other ways.”

The FA’s Chief Executive, Mark Bullingham, has already stated that England is ready to pay a fine for using the armband.

Due to worries about Qatar, he claimed it was “sad” that many LGBTQ+ England fans had not traveled there and it was ‘really important to show our values.’

The FA requested FIFA’s approval to wear the One Love armband last month, but they never heard back.

In response, FIFA has introduced its own captain’s armband as a part of a social campaign operated in conjunction with the UN that will support a new cause for each round of the competition.

No discrimination will be the theme for the quarterfinals, but none of the campaigns address LGBTQ+ rights.