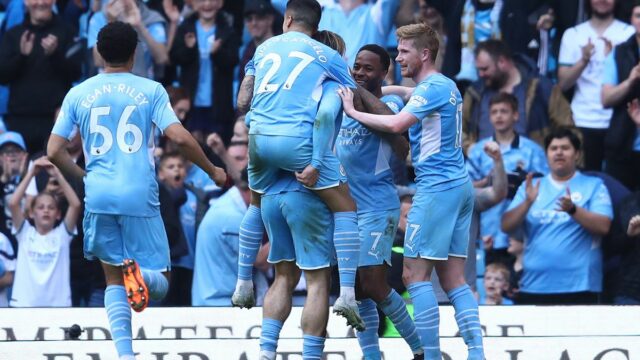 Manchester City smashed Newcastle United by 5-0 goals on Sunday to go 3 points clear of Liverpool in the EPL table. After staying only a point behind Man City for five straight games, Liverpool shared the spoils with Tottenham with a 1-1 draw on Saturday. Pep Guardiola’s men grabbed the opportunity to take a juicy lead by putting Newcastle United to the sword.

After the heartbroken exit from the UCL semi-finals, Manchester City hosted the league game against Newcastle United on Sunday. The Citizens became inspired to take the juicy lead by beating Newcastle as Liverpool had dropped points on Saturday night.

Raheem Sterling opened the scoring for Manchester City after 19 minutes. Gundogan put a fine cross into the box that reached Cancelo. The full-back assisted a headed pass to Raheem Sterling at the far post, which Sterling put into the nets from close range; 1-0 Man City. The Citizens doubled the lead inside the first half as Aymeric Laporte found the back of the traps in the 38th minute.

They made it 3-0 in the 61st minute following a beautiful corner delivery by De Bruyne that found Rodri at the near post. Rodri headed the ball past the goalkeeper to make it 3-0.

Manchester City helped their goal difference (GD) in the table by scoring two more goals at the death, one each for Phil Foded and Raheem Sterling, closing the match with 5-0 goals smashing win.

The only negative side for Man City is their injury concern for the backline. After the match against Newcastle, City boss Pep Guardiola confirmed that Ruben Dias would be out for the rest of the season. Dias took a knock against Newcastle and left the field. Three first-choice defenders, including Kyle Walker, John Stones, and Ruben Dias, are unavailable for Pep Guardiola. We may find Nathan Ake alongside Laporte in the heart of the City defense next match.

With the 5-0 goals win over Newcastle United on Sunday, Manchester City went 3 points clear of Liverpool. They are now on 86 points from 35 matches, 3 points ahead of Liverpool, who are on 83 points playing the same number of games.

If the Citizens win their remaining three matches, they will win the EPL, regardless of what Liverpool does. A lead of 3 points means Man City don’t need to win all three games, two wins and a draw will still keep them at the top.

If Liverpool wins all three matches and Man City loses one, they will be level on 92 points; it will all go down to the goal difference (GD).

Manchester City will visit to play Wolves and West Ham and host Aston Villa in their remaining matches in the EPL.

Manchester City will play against Wolves in their next match on Wednesday, 11 May 2022, at 7:15 pm GMT, which is 8:15 pm BST. It will be an away match for Man City at Molineux Stadium.

Liverpool will visit to play Aston Villa and Southampton and host Wolves in their remaining matches in the EPL.