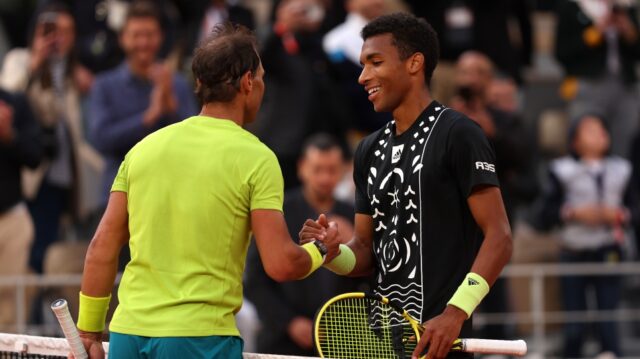 After this battle that lasted 4 hours and 21 minutes, Nadal will now face his great rival Novak Djokovic in the quarterfinals. This will be the 59th duel between the two men, a pinnacle in tennis history.

It’s the most important tournament of my career,” Nadal started in French on the court immediately after his victory before continuing in English.

“Felix is an excellent player, without a doubt. One of the best in the world. He is very young, with a lot of power and mobility. He was a formidable opponent.

He did many good things, and he improved throughout the tournament, like every year. I wish him success for the rest of the season, and he’s a good guy on the circuit.

Leylah Fernandez is now the only Canadian representative competing in this Grand Slam, having reached the quarterfinals earlier today.

Auger-Aliassime led 5-1 in the first set. In his first break, for 3-1, he took advantage of Nadal’s missed a semi-smash.

In the next game, two aces helped him take a 4-1 lead out of his seven.

The Mallorcan was quick in the second set, deserving it shortly after a break that gave him a 5-3 cushion.

Early in the third set, Nadal took a 2-1 lead on a break via a missed smash from his rival, who had a point at his fingertips for at least two strikes. The Spaniard added a break for 5-2 and quickly took a priority set.

Auger-Aliassime regained momentum in the fourth set, leading 3-1 with a second break.

He almost squandered a 40-0 lead in the seventh game, but a point collected with a powerful serve put him back in the saddle, keeping his serve.

He sealed the set to zero with a brilliant ace sequence, winning shot, cushioned and stolen.

In the last set, the mystery thickened when the score went to 3-3; once again, the Quebecer kept a serve after letting slip a 40-0 lead in the sixth game.

In the key game, where Nadal took a 5-3 lead with a break, the crucial ball was that pass that the Spaniard lodged on the backline.

Champion of Roland-Garros on 13 occasions, Nadal had the advantage of 6-4 for the breaks.

An indicator of the quality of the match, the Canadian had the upper hand narrowly for the winning shots, 50-47.

In his first two appearances at the Paris Grand Slam in 2020 (by Nishioka) and 2021 (by Seppi), Beaten, Auger-Aliassime, won his first ATP title in Rotterdam this year and reached the knockout stages for the first time at Roland Garros.

Over the past year, he has already reached the quarterfinals at Wimbledon and the Australian Open and the semis at the U.S. Open.

Nadal ended the debate on his first match ball after a clever exchange of volleys. Champion of Roland-Garros on 13 occasions, Nadal had the advantage of 6-4 for the breaks.

Auger-Aliassime committed 54 direct fouls, 13 more than his rival. An indicator of the quality of the match, the Canadian had the upper hand narrowly for the winning shots, 50-47.

For a little over a year, he has benefited from the advice of Toni Nadal, uncle and former coach of Nadal, the fifth player in the world.

It was the first time the two players had faced each other since Toni Nadal joined the young Canadian team.