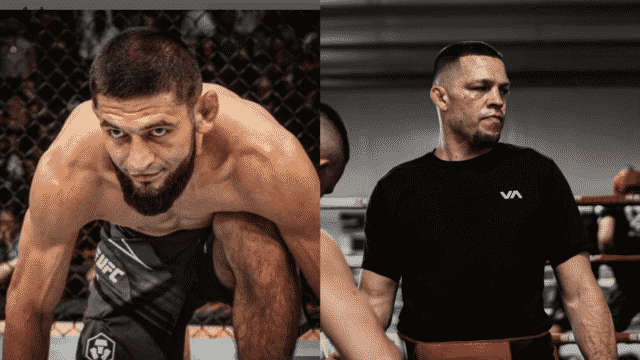 Dana White spoke about the possible fight between Khamzat Chimaev and Nate Diaz at an upcoming UFC event.

The rumor has been circulating for a few days now that a possible fight between Khamzat Chimaev and Nate Diaz could occur this summer.

No further information has come out since then. We know that the two men exchanged a few spades via social networks.

Nate Diaz will return if this fight goes forward, his coach had announced a few weeks ago. Khamzat Chimaev remains for his part in a victory against Gilbert Burns in a titanic fight where the Swede had to work to win.

Dana White spoke about a possible fight between Khamzat Chimaev and Nate Diaz, not closing the door to this confrontation.

“Yes, some of the fights you may have seen are temporary posters. So, when we do the event there, we will put big headliners necessarily.

But none of these posters are a settled matter. Some are only temporary solutions. Some of them are done, and some are not.

Regarding the Khamzat Chimaev vs. Nate Diaz fight, Dana White said he was “still interested in this fight” but admitted that he “didn’t know if it would happen.”

The hype is excellent since these leaks that we saw. The future will tell us if we will see a fight between the two men. Colby Covington also remains a possible opponent of Khamzat Chimaev.

Would you like to see a fight between Nate Diaz and Khamzat Chimaev?