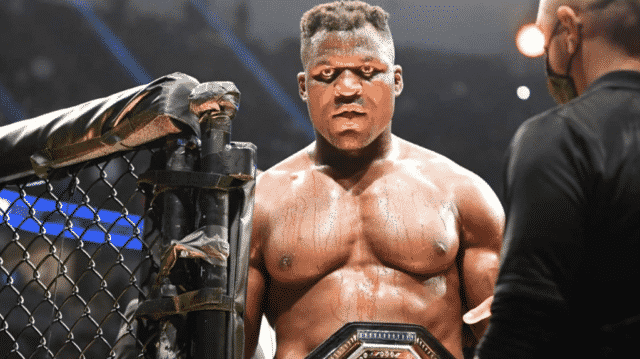 In an interview, Francis Ngannou announced the date of his return to the competition, evoking the end of 2022.

There is a lot of talk about Francis Ngannou at the moment. The Cameroonian has stated that he will fight Tyson Fury no matter what.

Negotiations with the UFC are very complicated, and “The Predator” has already announced that he will not sign a new contract in the organization if the fight against Fury can not take place.

According to Chael Sonnen, Francis Ngannou’s behavior amounts to a betrayal of Dana White and her organization.

Invited on the podcast The MMA Hour, Francis Ngannou had the opportunity to explain these different topics, starting with the date of his return to competition:

A return is possible in November but more likely in December. Because in December, I will be nine months away from recovery in total.

Even though my condition is improving faster than expected, I still want to give myself more time. I want to avoid injuring my same knee again at all costs.

Recovery of a few more months for Ngannou, who prefers to treat his wounds well before fighting again. Asked about the question of a fight in boxing or MMA, he was quite clear:

Things are clear on the Cameroonian side, and he wants to face Fury as soon as he is physically ready. If it takes place, the fight will probably be organized at the end of 2022 or even early 2023.

What do you think of Francis Ngannou’s statements?