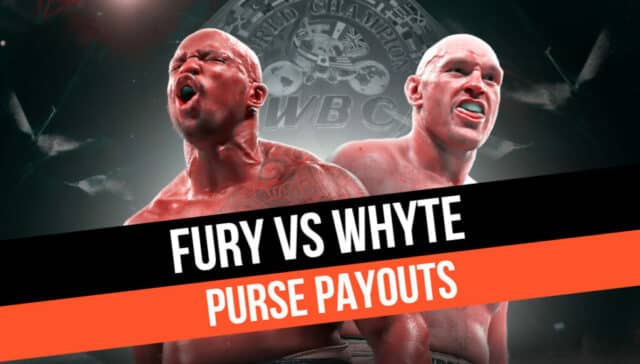 Tyson Fury will face Dillian Whyte on April 23 at the Wembley Stadium. Here, you will know the payouts of Fury vs Whyte.

The winning offer for the heavyweight title battle was announced in January and totaled $41 million. Frank Warren’s Queensberry Promotions put up a huge financial package that insured this heavyweight title bout would take place in England. Tyson Fury will be competing on home turf for the first time since 2018.

Fury stands to earn a whopping $29.5 million in salary for his main event services this weekend. This is only $500K less than the high-profile trilogy fight versus Deontay Wilder in October 2021. Of course, after all of the PPV sales and profits for the bout are totaled, Fury might earn much more money.

Dillian Whyte is set to earn $7.4 million this weekend in what will be his first shot at an undisputed heavyweight title. Since July 2019, Whyte has won the WBC interim heavyweight title twice. This is by far the largest fight money he’s ever earned, and it’s also the biggest opportunity of his career.

According to WBC regulations, 80% of the money goes to the champion, in this case Fury, with the remaining 20% going to the challenger, Whyte. However, 10% (£3.1m) of the bid was held back for the winner. The remaining funds were shared 80-20 in favor of the Gyspy King.

So, before any potential bonuses, Fury’s official purse for the bout is £22 million. Fury will also profit from ticket sales and pay-per-view money, since the bout will be broadcast on BT Sport Box Office.