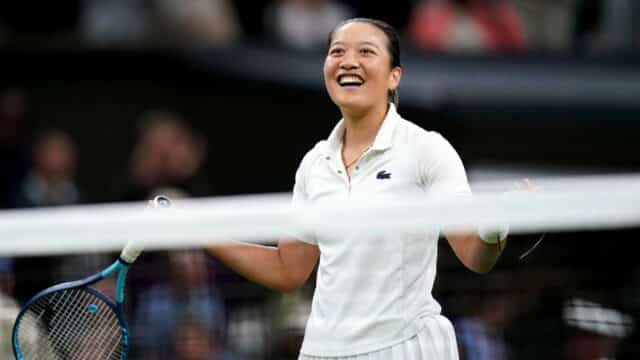 Harmony Tan withdrew from the Wimbledon doubles tournament on Wednesday. It was the day after her first-round singles win over Serena Williams.
According to organizers, Due to a thigh injury she can not continue playing for now.
The 24-year-old Frenchwoman and 115th in the world, had to team up with Germany’s Tamara Korpatsch. Tamara cordially accepted her partner’s proposal.
“I’m very sad, disappointed but also very angry that I can’t play my first Grand Slam double,” she tweeted.
“It’s not fair to me, I didn’t deserve that. She asked me before the tournament if I wanted to play doubles and I said yes, I wasn’t the one who went looking for her! ” adds Tamara in her message.
“If you’re broken after a three-hour game the day before, it’s because you’re not able to play at the professional level. That’s my opinion,” concludes the 27-year-old, ranked 110th in singles and 298th in doubles.
On Tuesday night, after a stifling match of nearly three and a quarter hours, Tan had eliminated the returning Serena Williams 7-5, 1-6, 7-6 (7).
She will face Spaniard Sara Sorribes (45th) on Thursday to climb to the third round of the women’s singles.
Related
ATP Korea Open 2022: Men's Draw, Schedule, Prize Money, Where to Watch

Dominic Thiem – Signs of His Former Self Ahead of 2023 Season?