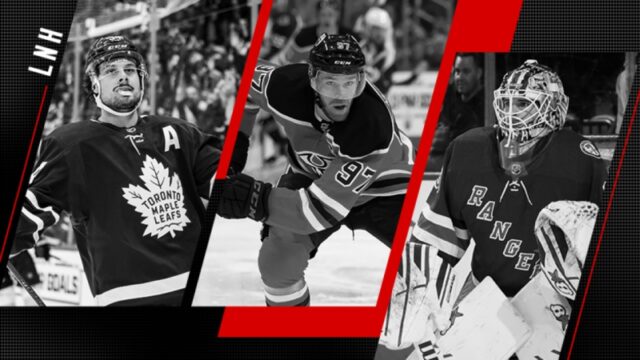 The NHL announced Thursday that Auston Matthews, Connor McDavid, and Igor Shesterkin had been named finalists for the Hart Trophy.

This honor is presented annually to the NHL player most useful to his team according to a vote conducted among the members of the Professional Association of Hockey Journalists (PHWA).

Matthews led the NHL in goals (60), the highest total in a season by a Toronto Maple Leaf player.

The Arizona-born American was also the first to reach that plateau since Steven Stamkos scored 60 goals for the Tampa Bay Lightning in 2011-12.

Matthews tied with Stamkos for sixth in the NHL with 106 points in 73 games.

McDavid finished first in the league, scoring for the second straight season with 123 points (44 goals, 79 assists) in 80 games with the Edmonton Oilers.

The star player has already won the Hart Trophy twice and is a finalist for the fourth time. McDavid was named Most Valuable Player in 2016-17 and last year, and he would become the third consecutive Oilers player to be awarded the award after Leon Draisaitl in 2019-20.

Shesterkin, who was also named a finalist for the Vezina Trophy on Tuesday as the best goaltender in the NHL, has compiled a 36-13-4 record in 52 games for the New York Rangers this season.

The Russian finished first in the league in goals-against average (2.07) and saved percentage (.935), and third in shutouts (six).

If he wins, Shesterkin will become the fifth Rangers player to earn that recognition and the first since Mark Messier in 1991-92.

He would also be the eighth goaltender to receive this trophy and the first since Carey Price of the Montreal Canadiens in 2014-15.

The winner will be announced during the NHL Awards Ceremony, which will take place during the Association Finals or the Stanley Cup Final Series.