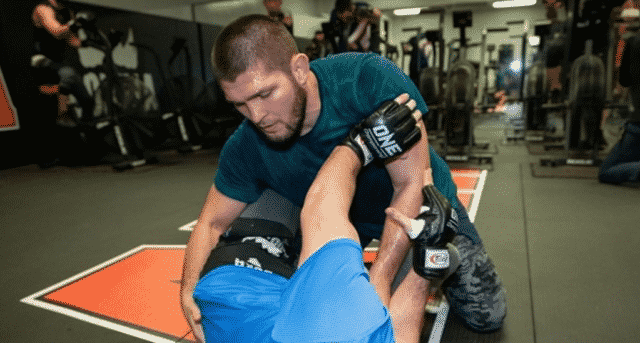 Georges St-Pierre is full of praise for Khabib Nurmagomedov. For him, he is indeed the GOAT of MMA.

In late December 2021, Dana White said Khabib was not the GOAT of MMA. Still, Nurmagomedov retired at 29-0 in MMA, he was a lightweight champion, and many thought he was the GOAT. But others, as he has only defended his title three times, thought otherwise.

Georges St-Pierre, who is also often considered the GOAT, thinks that Nurmagomedov deserved this qualification, and he explains why:

Khabib is the GOAT. He had a perfect career, and he was at the top. The way I see it when you say the greatest of all time, you have to wait until their career is over.

It’s sad to say, but many fighters tend to tarnish their legacy because they hang around there for too long. The greatest of all time is someone who has left behind a great legacy. If you stay too long after your career ends in a sport like basketball, it’s not too bad.

In a sport like boxing, MMA or kickboxing, you get punched in the head, it’s dramatic, and the outcome of a loss is much more serious than in another sport.

They say we play basketball, hockey, and football, but we don’t play fighting. Therefore, I say to the younger generation, make your money, fight when you’re at the top when you’re at your best and in your first, and then leave. Let it go.

Khabib Nurmagomedov has followed exactly the path described by GSP, and that is why he considers him the GOAT, which is also the opinion of Joe Rogan. Yet last year, Khabib revealed that there were not one but 7 MMA GOATs for him.

Do you agree with GSP that Khabib is the GOAT of MMA?