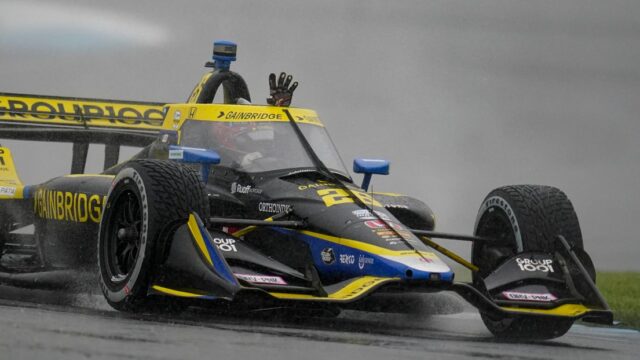 The victory is Colton Herta’s seventh in this discipline but his first in this season.

He chose to stop early to put on rain tires and then again at the end of the race to mount a new set of tires of the same type as the weather conditions deteriorated again.

“It helped us a lot. We were able to gain a lot of places,” said the winner, saying it was one of his toughest races with “tires for wet and then for dry and then wet again.”

Rain and a thunderstorm delayed the start by about forty minutes on this circuit which partly uses the ring on which the famous 500 Miles will be contested at the end of the month.

In the championship, after five races, Will Power leads with 169 points ahead of Spain’s Alex Palou (154), New Zealand’s Scott McLaughlin (153), and American Josef Newgarden (140).

France’s Romain Grosjean and Simon Pagenaud are 10th and 11th respectively with 112 and 109 points.