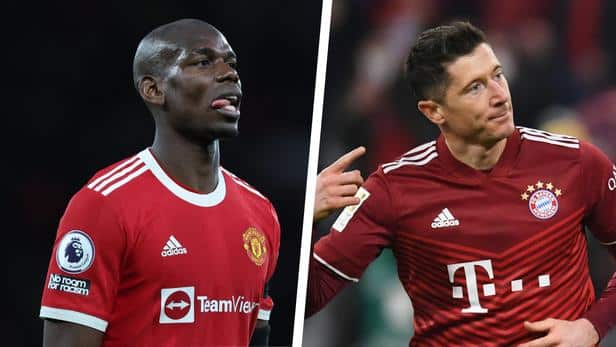 The future of Pogba, Lewandowski to Barça, or the extension of Dembélé: find all the Mercato information this Thursday, March 24, 2022.

Free at the end of the season, Paul Pogba spoke in Le Figaro this week about his Mancunian adventure and his future. The midfielder said he wanted to “make up for those years when [he couldn’t] win trophies.” “You have to be honest, it doesn’t satisfy me, over the last five seasons, but not at all.

This year, it’s dead; we won’t win anything yet. Whether it’s with Manchester or at another club, I want to win trophies,” he said.

The French international will likely change his tune this summer, as discussions between his entourage and the leaders of the Red Devils appear to be deadlocked.

And according to The Sun, it is jostling to recruit the 2018 World Champion for free. According to the British daily, Juventus Turin – his former club – Real Madrid and Paris Saint-Germain would be the favorites to host “La Pioche.”

But two other English clubs would closely monitor his situation: Newcastle United and its new wealthy owners, and Aston Villa, managed by Steven Gerrard. What will be Paul Pogba’s choice? Answer this summer.

What if the love story between Robert Lewandowski and Bayern Munich ended this summer? According to the elements published by Sport, the Pole would be ready to start a new romance in Spain, and more precisely, with FC Barcelona after twelve years spent in the Bundesliga.

However, last week, Bayern Munich wanted to be confident about the future of its serial striker, whom he does not want to see go: “There is no reason to leave Bayern.

You have all the opportunities here. Lewandowski did everything with us,” said Oliver Kahn, chairman of the club’s board of directors.

Robert Lewandowski, 33, joined FCB in July 2014 after an experience at Borussia Dortmund.

Little by little, Ousmane Dembélé reversed the situation. Promised a free start in the off-season, the French striker, back to his best under Xavi Hernandez, could finally stay a little longer in Catalonia after being dismissed this winter.

This is at least the will of some personalities in the Blaugrana… including Jordi Alba, who confided in his teammate on the Cadena Ser: “In his position, he is by far one of the best in the world. Honestly, I don’t know what he’s going to do even if his best option is to stay at Barca,” the left-back said.

Will Ousmane Dembélé, 24, find common ground with Barcelona’s leaders to extend, who has rejected several offers in recent months?

Gareth Bale is still in limbo about his future

What colors will Gareth Bale defend next season? No one knows, not even the main interested party.

“I didn’t think about it at all. Thinking about the future can generate doubts, which is why I did not do it,” he said in remarks reported by Fabrizio Romano.

One thing is certain; however, the Welsh striker, whose contract with Real Madrid expires at the end of the 2021-2022 financial year, will no longer wear the Merengue tunic.

For the rest, see you in May to find out more. The 32-year-old Gareth Bale arrived in the Spanish capital in the summer of 2013 from Tottenham for just over €100 million.

Considered one of the most promising young people of his generation, Ryan Gravenberch has no shortage of suitors.

Among the teams interested in his profile, we find Bayern Munich. And according to the latest indiscretions of Fabrizio Romano, the German formation would be active to convince the Dutch midfielder to join Bavaria this summer.

On the one hand, talks have reportedly been opened with Ajax Amsterdam. For the moment, the “FCB” would offer € 15 million, plus a € 10 million bonus, to attach the services of the 19-year-old player.

Insufficient for the Lancers, waiting for a superior offer to part with their nugget. Discussions are expected to continue in the coming weeks.

On the other hand, Bayern Munich would negotiate with Mino Raiola, Ryan Gravenberch’s agent, to find common ground regarding personal conditions.

The Bavarian club doesn’t want to miss out on the Amsterdam native. Ryan Gravenberch has scored 2 goals this season and provided 5 assists in 26 Eredivisie games.

On loan, this season from Cagliari to Hellas Verona, Giovanni Simeone (26) has surprised many since last summer. The Argentinian, son of Diego Simeone, already has 15 achievements and 4 offerings in 28 Serie A games.

Performances that do not leave insensitive the “Gialloblu.” According to information from Fabrizio Romano, the latter would be ready to exercise the option to buy the center-forward, which would amount to €12 million.

Will Giovanni Simeone settle permanently in Veneto? Many clubs would also be interested in his profile—folder to follow.