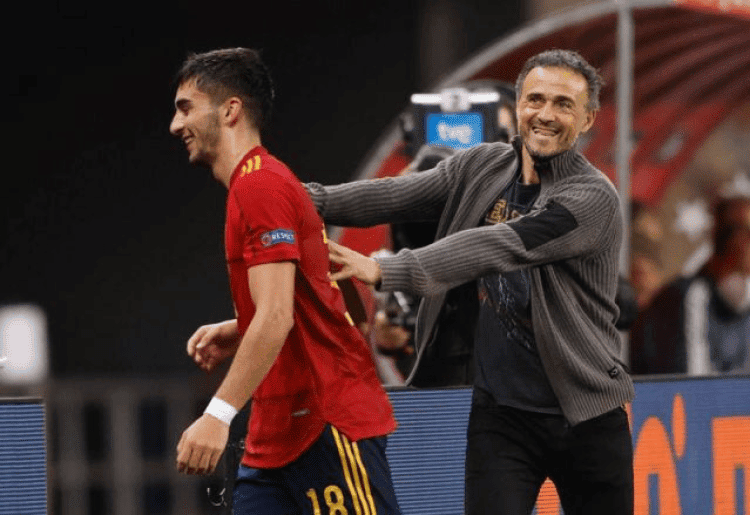 Luis Enrique, Spain’s manager, joked that he “might have to pick” Ferran Torres in the World Cup or his daughter Sira Martinez would “cut his head off.”

Before moving from Manchester City to Barcelona, the 22-year-old winger declared his connection with Enrique’s daughter earlier this year.

After excelling at the Camp Nou this season, scoring 12 goals in 44 games, he has now been called for the Spain World Cup team.

And in response to the question of which Spanish player might be the most similar to Enrique, the manager responded:  “hat’s very easy – It’s Mr Ferran Torres – otherwise my daughter will come after me and chop off my head.”

Martinez, Torres’ partner and a professional showjumper in Barcelona, responded to the question of whether he felt any pressure to play for Martinez’s father by saying: ‘Not at all.”

“I think the coach and I, we know how to differentiate between when it’s family and when we are manager and player.”

“I think we have to get on with it in a natural way, just that and we’re getting along fine.”

The winger has also played for Spain’s national team this year, appearing in nine games and tallying one goal. On Wednesday against Costa Rica, he is sure to make an impact.

Spain will compete against Germany and Japan in a difficult group, and they will have to put up a fight to win.

With an average age of 26.1 with youthful players like Gavi and Ansu Fati injecting new life into the Red Fury’s lineup, Spain’s team is one of the youngest at the world cup.

Torres acknowledged that they are a youthful team, but they are nonetheless focused on defeating Costa Rica and moving on in the World Cup.

“When you play against a team that is closed it’s always harder,’ he said. ‘They (Costa Rica) play in a very compact way. It will be hard.”

“We are a team with a lot ahead of us, we are very young.”

“The young ones, we are very hungry, very ambitious and keen to show off our football.”

He served as the current head coach of the Spain national team from 2018 until his resignation from the position in 2019 due to personal circumstances.

The following year, he took over again, leading the group to second place in the 2020–21 Nations League and the semifinals of Euro 2020.

a Barcelona agreement After making his relationship with Sira Martinez public, Ferran Torres left for Spain for reasons other than his performance on the field.

The 21-year-old striker shared a photo of Sira, the daughter of Spain manager Luis Enrique, on his Instagram stories after she had achieved success in her equestrian and polo endeavors.

Ferran published a photo on his Instagram stories, and Sira later reposted it.

The daughter of Luis Enrique, Sira Martinez, is a very talented athlete who, at the age of just 21, has already won the Spanish show jumping championship.

It’s dangerous to say the least to date your boss’s daughter, but Ferran Torres seems to be getting along well with Spain manager Luis Enrique so far.

While Torres was at Manchester City, he started a long-distance relationship with Sira Martinez; the two currently share a home in Barcelona.

When asked on his live Twitch stream who Vicente del Bosque’s extension on the field was, Luis Enrique replied that Sergio Busquets was his. Luis Enrique and many others grinned at his response.

“If I have to choose who is my extension on the pitch, I would say Ferran, because if not, my daughter kills me,” he scoffed.

Ferran Torres ended up being the person selected for the news conference the next day. Sport responded to the issue as Torres addressed it.

“I don’t take it as added pressure, we know that the coach is a joker and he simply made a joke while he was live.”

Later, he was questioned how he distinguished between Luis Enrique’s roles as the national team coach and the father of his girlfriend.

It is undoubtedly a tightrope that few people would dare to tread, and even fewer with a man like Luis Enrique who does not put up with fools well.