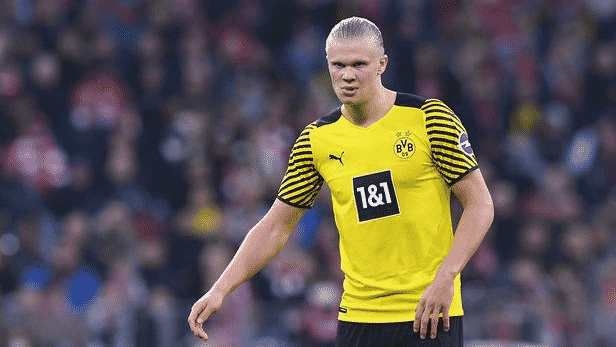 Manchester City dreams of attracting Haaland: Before facing Real Madrid in the semi-finals of the Champions League, Manchester City is fighting another battle against the Spanish club from the Spanish capital. A golden recruit for a successful future?

Erling Haaland, one of the best number 9 on the football planet

The future of both strikers (Mbappe and Haaland) has been the subject of much discussion in recent weeks. Announced as the two favorites to recruit him, Manchester City would still be ahead of Real Madrid, as indicated by his spokesman on the social network Twitter.

If the soap opera about Erling Haaland’s next destination keeps the whole football world awake, it is because it is simply one of the best current number 9s.

The one who joined Borussia Dortmund in the winter of 2019 has two full seasons and continues to impress his world in Germany.

Haaland did not experience any acclimatization problems when he arrived and scored 13 goals in 15 Bundesliga games. The 2020-2021 season is one of confirmation.

The man nicknamed the “cyborg” for his physique and atypical gestures, scored 41 goals, including 10 in the Champions League, delivered 13 assists, and won the German Cup.

Less present on the pitch with injuries that have upset him for part of this season, the Norwegian international continues to panic the counters with 25 goals and 8 assists in 27 games in all competitions.

At only 21 years old, Erling Haaland represents the future, but he is already the present. Behind Benzema and Lewandowski’s untouchables, whose career speaks for them, the striker of Signal Iduna Park already seems too big for Borussia and could leave the German club for a bite of bread.

Related
Man City, Haaland, and the Myth of the Transformative Signing

But in recent seasons, the SkyBlues have invested more of their money to strengthen their defensive line with the signings of Ruben Diaz for 68 million euros in 2020, Nathan Aké for 45 million euros the same year or Joao Cancelo in 2019, recruited for 65 million euros at Juventus.

In the off-season, Jack Grealish came to strengthen the offensive sector of the formation led by Pep Guardiola for a little more than 117 million euros.

Accustomed to spend astronomical sums to attract the best players and those who manage to adapt to Guardiola’s system, Manchester City will not need to go crazy to get the signing of Erling Haaland.

Upon arriving in Dortmund from Red Bull Salzburg in the winter of 2019, the Norwegian clan negotiated a departure clause with Dortmund’s sporting director, Mickael Zorc.

This release clause was thus placed to the tune of 75 million euros, and it became active from 2021. Previously, a club that wanted to recruit the Norwegian international would have had to negotiate with Dortmund and pay a much larger sum.

When you know the value of Erling Haaland and his room for improvement at only 21 years old, the price set to snatch his signature allows a lot of derisory in football nowadays.

The missing piece to (finally) glean the Champions League?

If Manchester City manages to put the grapple on the left-hander of one-meter ninety-four, the team coached by Pep Guardiola could well get the last missing piece of the puzzle to glean all the national titles but especially in the Champions League after which the club has been running since its acquisition in 2008 by an Abu Dhabi investment fund.

Because in recent European campaigns, Manchester City has often been taken out due to tactical moves attempted by Guardiola, who did without a real striker in his starting eleven by regularly leaving Kun Aguero or Gabriel Jesus on the bench in favor of Sterling or Silva in the lead.

But the latest failure on the verge of victory against Chelsea in the final last year (1-0) may have allowed the SkyBlues and their coach to face the facts.

This Manchester City team, a real steamroller, deserves to evolve with a formidable finisher to continue to pass the levels.

Faced with teams grouped in defense, like Atletico Madrid in the quarter-finals of the Champions League, the residents of the Etihad Stadium face the worst difficulties in breaking the lock by multiplying centers that only too rarely find takers.

With an incredible sense of purpose and extraordinary physique, Haaland could be the ideal solution to the last ills of Manchester City and Guardiola and allow them to finally win the cup with big ears.

The city will need a real number 9 to compete against Benzema’s Real Madrid team if the French international can beat the SkyBlues again.

An inevitable departure this summer

Erling Haaland, very courted since his debut at Borussia Dortmund, a club with which he has reached a milestone on the European level, probably plays these last games under the yellow and black colors.

The Marsupials have become too small for him. The Norwegian international aims to join a club to win national and European titles, something he fails to do with the formation led by Marco Rose.

He may represent the future of world football, but the “cyborg” is in a hurry since another player is also waiting to be crowned king of Europe… Kylian Mbappe.

In their duel from a distance, the two strikers are led to push and answer each other, as Lionel Messi and Cristiano Ronaldo have been able to do for nearly 15 years.

And for his part, the French world champion is thinking about his future.

His contract is looming at the end of the season, and he remains focused on Real Madrid, even though a new contract at PSG is not ruled out.

If Kylian Mbappe were to join the Spanish capital, there is no doubt that Erling Haaland would think very seriously about taking the direction of England… or PSG.

If he wants to achieve his collective and personal goals, enter the race for the Golden Ball and compete with his main rival for years to come, the Norwegian international will have to join a club more upscale than Dortmund.