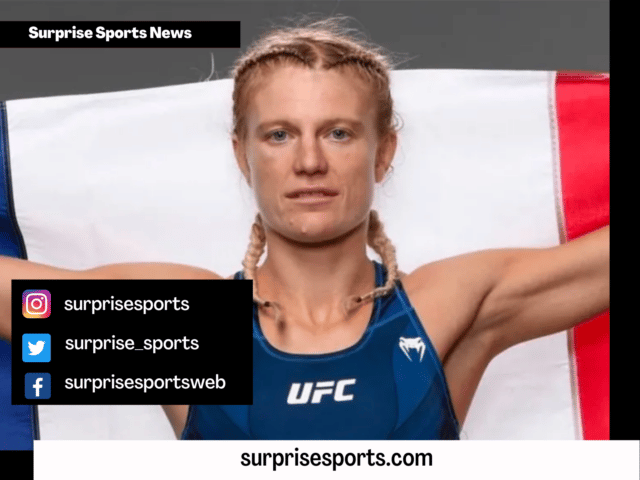 Following a forfeit by Jessica Andrade, Manon Fiorot will have to face the opponent she was supposed to face at UFC Paris.
Jessica Andrade was forced to give up her UFC Paris fight for medical reasons. Originally, Andrade replaced Katlyn Chookagian against Manon Fiorot.
Following this news, the Frenchwoman will have to face the opponent the UFC had proposed to her.
This news was announced at UFC Long Island this weekend (all results here). UFC commentator Jon Anik revealed this following a post-fight interview with Lauren Murphy. The latter was just coming off a victory against Miesha Tate.
Manon Fiorot currently has 4 wins against 0 losses in the UFC. Now she is coming off a win against Jennifer Maia at UFC Columbus. The French impresses with her performances and does not lack confidence.
However, “The Beast” will have a lot to do when she faces Katlyn Chookagian, number 1 in the flyweight division standings.
The latter is, just like the French, on a series of 4 consecutive victories in the UFC. Also, comes out of a victory by split decision against Amanda Ribas.
If Manon Fiorot wins against Chookagian on September 3, the next step for the French fighter will most surely be the fight for the title.
The MAIN EVENT of UFC Paris will see Cyril Gane and Tai Tuivasa, two heavyweights likely to offer spectacular opposition to MMA fans.
Do you think Manon Fiorot will win against Katlyn Chookagian?
People Also Read: Ryan Garcia defeated Javier Fortuna by TKO in the sixth round
Related
Luke Shaw Reacts to Maguire's Latest Insults, Urge Fans to Encourage His Form