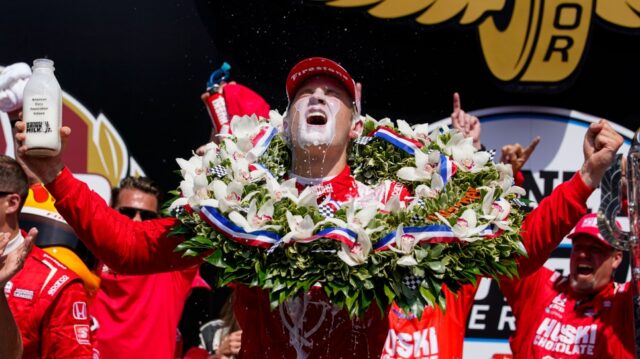 Sweden’s Marcus Ericsson won the Indianapolis 500 on Sunday ahead of Mexico’s Pato O’Ward in a thrilling final due to a red flag four laps from the end, followed by a fresh start.

The podium is completed by Brazilian Tony Kanaan, a 47-year-old veteran.

With this victory, Ericsson takes the lead in the provisional general classification of the IndyCar championship, which includes the Indianapolis 500.

This is the 2nd success of a Swedish driver in the famous American race after Kenny Bräck in 1999.

Marcus Ericsson, 31, a former F1 driver, took the lead in the final laps and was able to keep it after the new start, battling wheel to wheel in the last corners of the oval circuit with Pato O’Ward.

“I can’t believe it,” said Ericsson, who drank the winner’s traditional milk. He thanked his team Chip Ganassi, one of the most famous in the IndyCar championship.

As usual, this 106th edition of the 500 Miles was beset by many incidents that were not serious.

The first was the fact of the Dutchman Rinus Veekay, who hit the wall on lap 38, causing the first intervention of the safety car while cleaning the track of debris.

The Spaniard Alex Palou, who was fighting for the lead at the start of the race, lost all his chances when he saw the pit entrance close up in front of him while he was about to refuel on lap 68.

Forced to slow down in front of his mechanics and stop a few laps later, the Spaniard crowned IndyCar champion 2021, having finished 2nd of the 500 Miles, then fell to 26th place before starting an impressive climb leading him to 9th place at the finish.

At the halfway point of the race, poleman Scott Dixon was in the lead, the New Zealander ahead of the American Conor Daly, Pato O’Ward, and Marcus Ericsson. The Frenchmen Simon Pagenaud and Romain Grosjean were then in 11th and 18th place, respectively.

Grosjean then left the track shortly after on lap 106, without harm to him, ending his first experience of the famous American race.

“The car went head-to-head; I don’t know why. There were no warning signs in this corner. I will look at the telemetry to figure out what happened,” the pilot told U.S. television after the crash.

At 36 years old and with 179 F1 Grands Prix to his credit, the French driver debuted in IndyCar last year but had initially decided not to participate in races on oval circuits, such as the Indianapolis 500, deeming them too dangerous before revising this year.

However, Dixon, who seemed well on his way to winning the race, lost his chances with 25 laps to enter the pit track too quickly and thus received a penalty forcing him to make another stop.

It was then an accident less than five laps before the arrival of veteran Jimmie Johnson, an ace of NASCAR races that started in Indianapolis at the age of 46, who came to reshuffle the cards.

The race was placed under the red flag while Ericsson was in the lead. The Swede managed to maintain his advantage when it was revived, with O’Ward failing in his attempt to overtake him on the final lap.