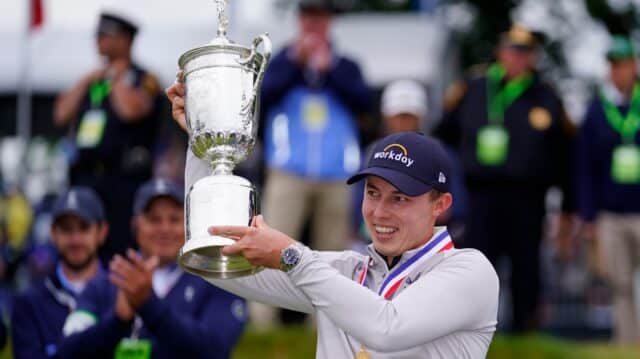 England’s Matthew Fitzpatrick won the US Open (Golf) 2022. Earning his first major title on the same course he won the amateur title nine years ago.
Fitzpatrick carded a 68 (minus-2) on the course at Brookline Golf Club. And edged out Will Zalatoris and Scottie Scheffler by one stroke on Sunday.
Following one-shot, Fitzpatrick sent his tee shot into the sand pit on the 18th hole.
Yet, he reached the middle of the green and made two rolls to confirm his normal and cumulative score of minus-6.
“I have no words. That’s what you dream of growing up. It’s something I’ve worked so hard for so long. My first victory in a Major. There is nothing better,” commented the 18th player in the world.
“It’s one of the best shots I’ve ever hit in my entire life. When I saw the ball coming out of the sand, I couldn’t have been happier,” he reacted.

Originally from Sheffield, he was only 18 years old when he won in 2013 at the Country Club in the suburbs of Boston.
Eleven other golfers have achieved the same double. Including the legendary Jack Nicklaus. The only one who has done it like him on the same course, that of Peeble Beach in California.
“It means a lot to know that my name is next to his. I don’t know if he listens to me. But he chambered me a little at the beginning of the year when I got my Bears Club membership card. (Owned by Nicklaus, editor’s note).
He said, ‘Finally! Congratulations on having this victory in the United States. I can now tell him, ‘ Jack, I won a second time this year,'” he said with a smile.

Zalatoris was the only golfer who could force overtime. As he faced a 14-foot shot for a birdie, but the ball just missed the hole.
“Matt’s shot on the 18th hole will be shown for the rest of US Open history,” Zalatoris said. I approached and thought you had to have guts to aim for the hole.
The simple fact that he tried it and could give himself a look for a birdie is incredible. I tip my hat to him. He played well all week, and he had a good round today.
At the same time, Zalatoris settled for second place in a second consecutive major tournament. He lost in overtime to Justin Thomas last month at the PGA Championship.
Zalatoris has posted his sixth top-10 finish in seven majors. And made his major debut at the 2020 US Open on the Winged Foot course.
Fitzpatrick hit 17 greens in prescribed shots. He became the first Englishman to win the US Open since Justin Rose in 2013. That year, Fitzpatrick had triumphed at this amateur tournament.
He also joined Jack Nicklaus as the only player to have won the US Open and the amateur leaning on the same course. Nicklaus had achieved the feat at Pebble Beach in 1961 and 1972.
Scheffler had put pressure by bringing back a card of 67 to lead to the cottage at minus-5. He had managed a birdie in the 17th pennant to force Fitzpatrick to finish the round without a clash.
The round of the day came from Hideki Matsuyama’s sticks. The Japanese played 65 and took fourth place on his own, with a cumulative score of minus-3.
Canada’s Adam Hadwin completed the course in 71 shots. And finished the event tied for seventh place at minus-1.