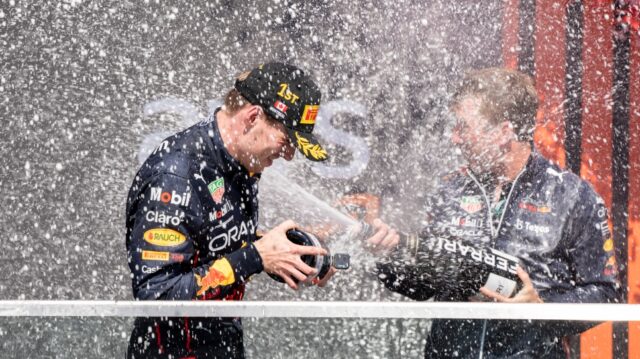 On Sunday, for a second consecutive year, Verstappen won the Grand Prix. He showed the whole arena why he is the favorite to win the Formula 1 World Championship.
The Red Bull driver won the Canadian Grand Prix. He scored his first career victory at circuit Gilles-Villeneuve.
Verstappen, starting from pole position, won the 70-lap event. The weather was sunny and had a comfortable temperature of 19 degrees Celsius.
After being 0.993 seconds ahead of Ferrari driver Carlos Sainz Jr. he achieved the victory.
Mercedes driver Lewis Hamilton completed the podium.
“It was a tough race; I expected to have more rhythm. It looked like we were slower than Carlos’ (Sainz Jr.) Ferrari. But we stuck to our strategy, and it worked in the end,” said Verstappen, who now has 26 career wins.
“We pushed for the last 15 or 16 laps, and I knew I couldn’t make a mistake (in front of Sainz fils). But it was a good race.
It’s always better to push your car, rather than having to do management to save the tires,” he added.
The reigning world champion recorded his sixth victory in nine races this season. Widening the gap at the top of the standings.
Mercedes driver George Russell finished at the foot of the podium. Charles Leclerc made an amazing comeback after starting from 19th place on the grid.
The Monegasque received the driver of the day title.
Alpine drivers Esteban Ocon and Fernando Alonso started second place alongside Verstappen. And got followed in sixth and seventh place.
Valtteri Bottas (Alfa Romeo), Guanyu Zhou (Alfa Romeo), and Lance Stroll (Aston Martin) rounded out the top 10.
Stroll scored his third top-10 this season and now has three ranking points.
Toronto’s Nicholas Latifi finished 16th for Williams.
Red Bull driver Sergio Perez dropped out on lap nine due to a gearbox problem.
Mick Schumacher (engine) and Yuki Tsunoda (off-track) were also unable to finish.

Positive for Sainz fils, despite everything

The race was following the exit of Tsunoda on the 49th lap. The safety car then came out. Allowing Sainz Jr. to find himself in Verstappen’s gearbox with over 10 laps to complete.
Yet, Verstappen’s Red Bull proved superior to Sainz Jr.’s Ferrari in a straight line. Prevented the Spaniard from taking advantage of the DRS to surprise the championship leader. Despite his many attempts to overtake.
“The safety car didn’t help, and in general, they (the Ferraris) were very fast today. It’s hard to chase someone here, but I could see that he (Sainz) was attacking, pushing, attacking, pushing.
The last few laps were a lot of fun,” Verstappen said.
Sainz said in a post-race press conference that he felt for the first time this season that he had the fastest car on the grid. Pulled a lot of positives from his working day despite the final result.
“I was pushing relentlessly, and I was at the limit in every corner. I tried everything to surprise Max, but at least we were faster today.
We had more pace,” Sainz noted. We came very close to winning today, so we have to take some positives from that.
For his part, Hamilton seemed relieved to have secured the first podium since his third place in Bahrain earlier this season.
“We are quite surprised by this third place. We have remained cautious and have never given up, and that is what motivates me. We are getting closer.
I could almost see them (Verstappen and Sainz Jr.) at the end! Honestly, I’m ecstatic,” said the 37-year-old Briton, smiling.
Verstappen now leads the championship with 175 points. 46 points ahead of Perez and 49 ahead of Leclerc. Russell (111) and Sainz Jr. (102) followed.
The Canadian Grand Prix was presented for the first time in 2019. The 2020 and 2021 editions had been canceled due to the coronavirus pandemic.
The big circus of F1 will now move to Silverstone, on July 3, with the presentation of the British Grand Prix.
People Also Read: Canadian GP 2022: Starting Lineup, Time, TV, Coverage
Related
Neymar Joins Lionel Messi And Pele as The Only Three South American Players to Score 75+ International Goals