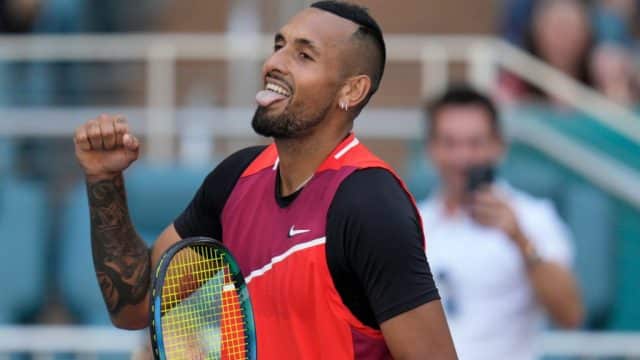 Nick Kyrgios is having his best time in tennis. He is making huge progress in all the tournaments. Where ever Kyrgios is going, he is giving outstanding performance. This season will probably be the best season in his career compared to his previous year’s performance.

At the beginning of the two tournaments, Kyrgios wasn’t quite good. But then the Australian superstar returned to court like King. Sydney International and Australian open didn’t open the lucky gate for him, but at Indian Wells and Miami Open, he was like the fire that nobody could stop.

In the last two tournaments of Kyrgios, he reached the quarter-final but lost the game to Nadal. Nadal had to fight with his strength to stop Kyrgios. That was a very struggling match Nadal. Giving hard to the world’s most talented tennis players is not a thing to do.

And then Kyrgios went for Miami Open. He gave such an amazing performance there too. If Kyrgios could use more time to use his technique properly, then he could have a different future in the Miami Open.

After leaving the Miami Open, Kyrgios came to play at his biggest fear in clay court at ATP Hutson. Clay court never brings anything good to Kyrgios. He is boss everywhere, but for some reason, Kyrgios can’t show his ability on the clay court. The crushed stone, brick, shale, or other unbound mineral-made court has always created obstacles for Kyrgios.

Kyrgios will face Tommy Paul next. Defeating Paul won’t be as easy as it was with McDonald’s. Paul is one of the top seed and high-profile players in the Hutson ATP 200.

Kyrgios also have a plan to visit French Open next year even though the French Open is completely played on clay court. He is optimistic about his performance now. Kyrgios says that his girlfriend wants to visit Paris, and that’s why he decided to take part in the next French Open Championship.

Kyrgios says about his clay-court experience, “Clay is obviously not my preferred surface, but I just served really well and started playing more aggressively and found another gear. I did slip and slide a little bit, but my game actually suits the clay quite well. It’s a great atmosphere out here, and the crowd’s pretty involved, so I’m looking forward to continuing to progress through the event.”