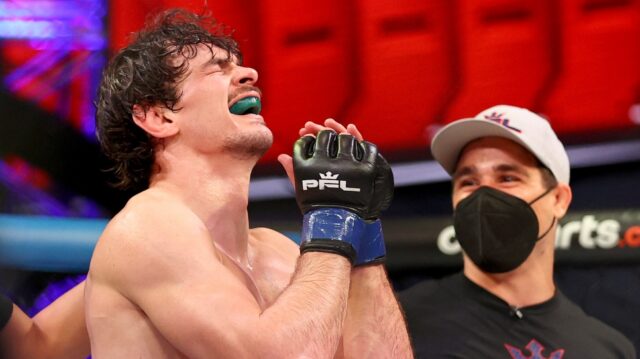 Olivier Aubin-Mercier won his second professional fighters league fight of the season against Brazil’s Raush Manfio on Friday in Atlanta in the lightweight category.

This allowed him to qualify for the PFL playoffs and fight for the enticing $1 million purses awarded to the winner.

Aubin-Mercier admitted after his performance that it was not his best, but he did what it took to get this important victory.

“I am happy with the result. It was a pretty bad fight, but a gangster does what he wants,” laughed the so-called Canadian Gangster in front of a visibly dissatisfied crowd.

In a very calculated first round, OAM threw the best strikes, and he was the most active.

The second assault was similar, with both men relying exclusively on standing combat.

OAM, although cautious, still gave good shots, and he also defended well against the attacks of his rival, who made few combinations.

Manfio lost on the judges’ card in his last fight before passing a knockout to the opponent in the final round, but Aubin-Mercier did not have the same round played tonight.

OAM held the Brazilian against the fence and attempted a ground bring without success. In the end, he did just enough to win, but without a shine.

At the end of the duel against Natan Schulte on April 20 in Arlington, Texas, the Quebecer had snatched a split decision in his favor.

Manfio also emerged victorious from the cage at the end of his first fight of 2022, passing the knockout to Don Madge.

205 lbs: Delan Monte defeated Emiliano Sordi by technical knockout in the 1st round

205 lbs: Rob Wilkinson defeated Viktor Pesta by technical knockout in the 1st round

205 lbs: Josh Silveira defeated Marthin Hamlet by technical knockout in the 1st round

155 lbs: Nate Jennerman defeated Jake Childers by submission (back choke) in the 2nd round