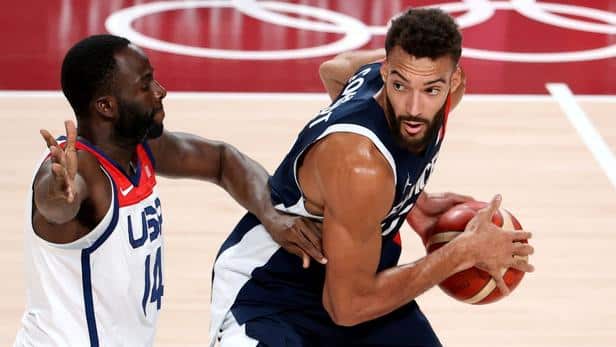 The pivot of the French team returns, in a press conference, on the controversy about the attribution of the Parc des expositions de la Porte de Versailles for basketball during the next Olympic Games.

Basketball in Hall 6 of the Parc des Expositions, Paris, during the 2024 Olympics? That was not the plan in the first place. The big orange ball was to take up residence at Arena 2 de la Porte de la Chapelle and the Accor Arena in Bercy.

Following several modifications, the group stage of the men’s and women’s basketball tournaments must finally take place at the Porte de Versailles before returning to Bercy for the final phase.

A decision that did not only make people happy, Evan Fournier having spoken several times. He is not alone. And his blue comrade, Rudy Gobert, spoke in turn.

After the victory of the Jazz on the floor of the Knicks (93-108), Sunday, at Madison Square Garden in New York, the Giant Picard was indeed questioned on the subject in a press conference.

“We talked about it with Nico (Batum), Boris (Diaw); I wanted to have more information before reacting,” he said first. He continued: “We are aware that there are many other sports. No sport is important.

But it’s true that when you have the most-watched team sport of the Olympics (basketball, Editor’s note) and players from all over the world who come, the best in the world, and that in addition, you have a French team that has just won silver at the Olympic Games.

There is an audience because I do not see how it would not be full every night if we played at the Accor Arena; that’s too bad… (…) For me, this is a missed opportunity.

I hope they will make the right decisions and ensure there is a little respect for our sport. I’m not going to play in a room where I hit my head when I shoot (smile). It doesn’t make sense.»

“It’s a little disrespect for our sport.”

The famous Hall 6 of the Exhibition Center has a ceiling height of nine meters, which is regulatory for basketball practice but not common.

For example, it would be impossible to install the usual device to display scores and statistics above the floor, not to mention the air conditioning system of the room in question, making the parquet slippery and dangerous.

This is hardly a problem for holding events such as the Salon de l’agriculture just a few days ago. “I love farming but playing basketball…” ironically, the pivot of the Salt Lake City club.

We hope. Conversations are going on,” adds Gobert, 29. “But it’s a little lack of respect for our sport and what our team has been accomplishing in recent years, but also for our fans. We have a lot of basketball fans in France.

The Olympics at home is once in a lifetime, in a career. So it’s a shame not to maximize this experience, “concludes the French international with 74 caps and four medals in the French team, bronze at the 2014 and 2019 World Cups, and Euro 2015, before silver in Tokyo last summer.

In Paris, Vincent Collet’s men will try to do at least and offer France a fourth Olympic medal in the men’s category, the first dating from 1948 and 2000, already in silver.