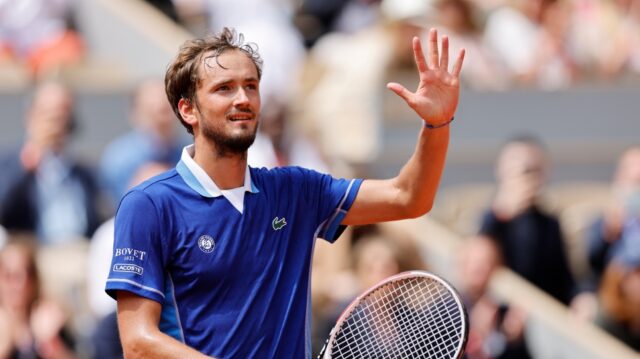 The task will likely be more complicated in the next round for the 26-year-old Russian who has little taste of clay and will face another Serb, Miomir Kecmanovic (31st), who fell to Alexander Bublik on Thursday.

After winning the first two sets, Medvedev was hooked in the third by an opponent who managed many winning points (39 in total).

But the Serbians also committed many direct fouls (68) that allowed the Russian to control the game.

Medvedev was never really put in danger with a successful break from the start in the third set and relying on an efficient serve (7 aces in total, including 3 in the third set).

He even concluded on Djere’s serve by taking advantage of a double fault and then a direct foul by his opponent.

“I was not confident in this third set because I was only one break ahead, and on clay, a break is nothing,” commented the Russian happy to have come out of a “difficult match.”

Last year, he reached the quarter-finals in Paris, where he passed the first round for the first time in five participations.

This year, for his sixth Roland, he arrived in the unknown after undergoing surgery to treat a “slight hernia.”

Absent from the circuit for two months, he had returned to Geneva just before the France International, where he had been beaten as soon as he entered the competition by Richard Gasquet.

Winner of the last U.S. Open, Medvedev was a finalist at the last two Australian Open, where Djokovic beat him in 2021 and Nadal last January.

For her part, eighth-seeded Casper Ruud emulated Medvedev and reached the third round for a third year in a row in Paris.

In two matches, Tsitsipas has already spent more than seven and a half hours on the courts of the Porte d’Auteuil.

The most prolific player in 2022 with 33 victories, including sixteen on ochre, Tsitsipas is playing his sixth Roland-Garros.

“He drove me crazy,” said the 23-year-old Athenian about his daring opponent, warmly supported by the audience of the Suzanne-Lenglen court, which was not without annoying him in the tensest moments.

Related: Roland Garros 2022: Pliskova eliminated by the 227th player in the world