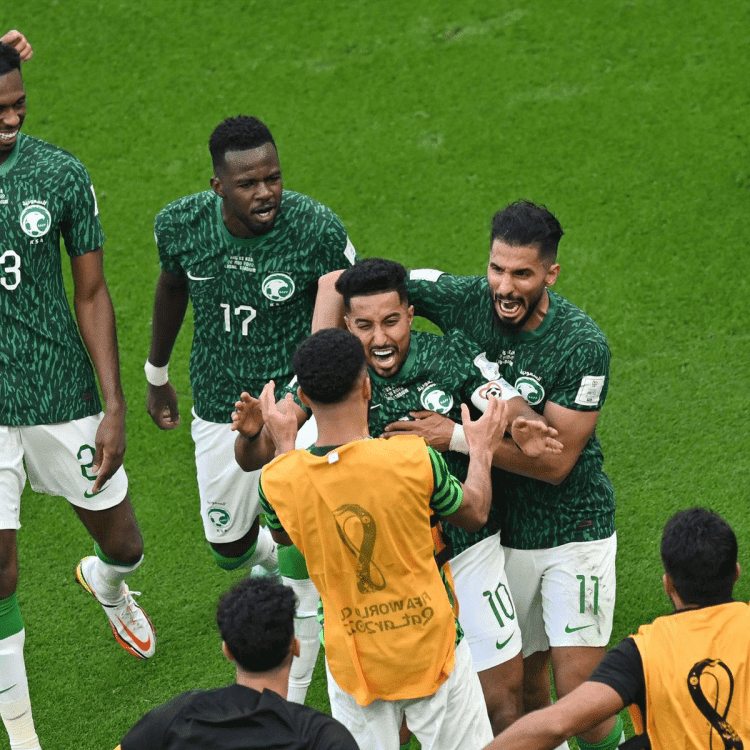 Saudi Arabia stunned the world as they beat Argentina in their first match despite penalty goal from Lionel Messi.

Who would have predicted this outcome? The tournament favorites Argentina, ranked third in the FIFA rankings and featuring Lionel Messi in their lineup, were thoroughly outclassed by 51st-ranked Saudi Arabia.

And the Green Flacons only needed five brilliant minutes in the second half to win. Prior to Argentina having three goals in the first half disallowed for offside, Messi converted the penalty in the tenth minute.

Saleh Al-Shehri tied the score three minutes into the second half before Salem Al-Dawsari scored a stunning goal to give Saudi Arabia the lead.

They played outstanding defense, denying Argentina any additional chances as they easily won 2-1.

Lionel Messi’s penalty in the 10th minute had put the 51st-ranked Saudis behind, but Al-Shehri managed to score an angled goal in the 48th minute after punishing shoddy Argentine defending.

Five minutes later, Al-Dawsari curled an incredible shot from the edge of the box into the top corner, sending the Saudi Arabian fans into a frenzy.

Argentina was on track to break Italy’s record of 37-match unbeaten streak after the erratic Messi scored Argentina’s opening goal in his fifth and last World Cup appearance by stroking in a penalty in the 10th minute.

Argentina would have been safe before halfway if not for three goals that were disallowed for offside, one from Messi and two from Lauturo Martinez. However, the game was dramatically changed after the break.

After that, Argentina had a lot of possession but was unable to break through the Green Falcons, who were playing in their sixth World Cup but had never won their first game.

The Lusail Stadium hosted the game in a remarkable atmosphere, with thousands of Saudis crossing the border to support their team joining Argentina’s customarily large and boisterous fan base.

“Our team fulfils our dreams!” and “Where is Messi? We beat him!”, every clearance, even one that was headed off the goal line, was met with a loud scream from the green-clad Saudis in the Lusail Stadium.

Both teams still have Mexico and Poland to play, but Argentina needs to act quickly if Messi is to surpass Diego Maradona’s immortality in his native country by winning the World Cup.

The outcome brought back longstanding concerns about Argentina’s defense and ended their incredible 36-match winning streak. That prevented them from tying Italy’s previous record of 37 games without a loss for a nation.

Messi’s Tuesday accomplishment of becoming the first Argentine to score in four World Cups on his 20th appearance in the competition was also marred by it. Only Maradona, with 21 games total, has represented Argentina in more World Cup games.

“This hurts a lot. We were dreaming of starting the World Cup with a win,” said Messi’s teammate Martinez. “But it’s happened and now we have to train and think forward.”

“We lost this game because of our own mistakes, most of all in the second half. There are details that make a difference and we need to correct our mistakes.”

When the marauding Messi nearly scored in the first few seconds, rejoiced after sending Saudi goalkeeper Mohammed Al-Owais the wrong way with his penalty, then had another goal disallowed, everything had seemed so different at the beginning.

The Saudis’ poor tournament history, which includes losses to hosts Russia in 2018 by a score of 5-0 and Germany in 2002 by a score of 8-0, was overshadowed by the outcome.

Salman Al Faraj, their influential captain and midfielder, left just after halftime with a hamstring injury, making their victory over the two-time World Cup champions and current South American champions all the more impressive.

The Saudis’ coach, Herve Renard, had them fired up like never before, according to midfielder Abdulelah Al-Malki.

“Renard made us cry with the motivation before the match and stoked us up during halftime,” he said, affectionately calling the Frenchman “crazy”.

Brazil defeated Argentina in the Copa America semifinals in July 2019, which was Argentina’s most recent loss. They are ranked third, 48 spots higher than Saudi Arabia, according to FIFA.

Due to his outstanding performance against Argentina, Saudi Arabia’s goalkeeper was compared to “prime” German legend Manuel Neuer.

When the Saudi Arabians defeated Argentina 2-1 on Tuesday afternoon, they pulled off one of the tournament’s early surprises. But their goalkeeper Mohammed Al-Owais is responsible for the shocking result.

Lionel Messi’s first touch in the Group C match was stopped by Al-Owais’ quick reflexes. Nevertheless, he was unable to stop Messi from scoring a penalty after he incorrectly guessed the location of the forward’s ensuing shot.

But it was after the hour mark when Al-Owais produced two miraculous saves that happened minutes apart.

The 31-year-old first deflected Nicolas Tagliafico’s shot from close range, and then he equaled his genius by diving off his line to grab the ball from above the approaching Julian Alvarez’s head.

Fans also compared him to the legendary Neuer of Bayern Munich, whose skills enabled Germany to win the World Cup in 2014. One supporter gushed: “This Saudi Arabian goalkeeper has been the best player today.”

“Saudi goalkeeper turning into Neuer versus Argentina,” another person commented. Another voiced a similar opinion, saying: “This Saudi goalkeeper is channelling 2014 Neuer, that rush off the line was magic.”

At the other end of the field, Argentina star Cristian Romero received none of this appreciation. He received criticism for his shoddy, “Spurs style defending,” which led to Saudi Arabia’s rapid-fire goals in the first half.