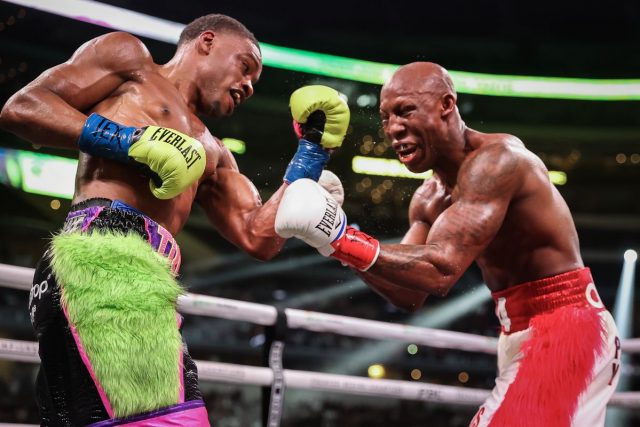 Here we prepare an article on the Spence vs. Ugas after fight overview. In our article, we broke down all the information and talked about the catching moment of the fight. Here we will also discuss the payouts and earnings of fighters from the event.

Last night Texas saw the return of their best player Errol Spence Jr. vs. Yordenis Ugas. The AT&T Stadium saw the blood and fire of Spence and Ugas. All the audience felt the thrill of the fight. They cheered up with every punch Spence made. And the knocking-out moment in round 10 was the time that everyone wanted to see for a long time. The bout against Ugas indeed put Spence in his old form. He proved everyone wrong and showed his skill and worth in the welterweight division.

Spence was out of the fighting ring for 16 months. And then he set a match with Ugas in his hometown stadium. But the long gap has created huge problems for him. After seeing Spence’s first two-round fight, anybody can tell that he was trying hard to find fighting rhythm. But it was Spence- the unbeaten champion since debuting in 2012 as a pro; he soon catches fight and enriches his record to 28-0.

In round six, Spence lost his mouthguard. He started to look for his mouthguard. Later, Spence dropped his cover too on the ground. It took away his attention from the fight. And Ugas was about to take advantage of this. Ugas came forward to punch Spence’s uncovered head. If Ugas could make it happen, then Spence may taste the flavor of defeat for the first time.

But, Spence fell backward to the rope, and Cole paused the fight. Spence took a fresh chunk of molded rubber into his mouth. And after the chase board flipped in no time.

In seven and six rounds, Spence landed 39 punches on Ugas. In the next round, the punches were Spence 46 and Ugas 10. Uags lost control over the game completely; in the ninth and ten rounds, Ugas took 15 punches, and he made only one. Ugas’s eyes were almost shut down, and he could not see anything.

After that, Ugas was sent to the ringside doctor, who gave a no-go-sign to the referee Cole. Cole stopped the fight by technical knockout in round 10, and Spence successfully defended his WBC and IBF titles plus, he became the unified world welterweight titleholder.

Both Spence and Ugas payouts are quite the same from the fight. Each of the fighters gets a 50% share from the PPV commission. Their fixed salary difference isn’t much either.

Spence’s total earnings from the fight are around 6 million dollars. He got around 2 million as a fixed salary and received 4 million from PPV percentage.