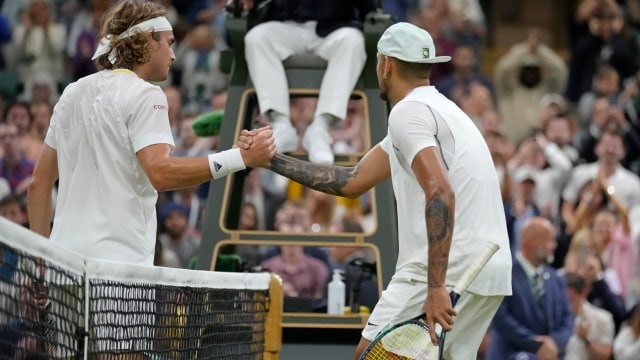 London Grand Slam tournament organizers have fined Stefanos Tsitsipas and Nick Kyrgois.
On Saturday a stormy match occurred at Wimbledon. Australian player Nick Kyrgois won the 3rd round match in four sets.
Tsitsipas (5th in the world) was fined $10,000 for angrily sending a bullet into the audience of Court No. 1. Kyrgios (40th in the world) was fined $4,000 for uttering an obscenity.
In a match, Kyrgois called “crazy”. He did everything he could to disturb and upset his opponent. The referee, and the audience hysterically.
Exasperated, Tsitsipas targeted the Australian several times on heavy strikes. Like, Smash, forehand high close to the net while Kyrgios was inside the court in front of him. Without touching it.

“He spends his time intimidating others (…) He martyrs his opponents. He was probably a bully at school himself.
I don’t like bullies (…) there is also a demonic side to him. When he speaks, can hurt and do a lot of harm to the people around him,” said the Tsitsipas after his defeat.
“Maybe he should first figure out how to beat me once or twice before taking care of anything else,” Kyrgois responded.