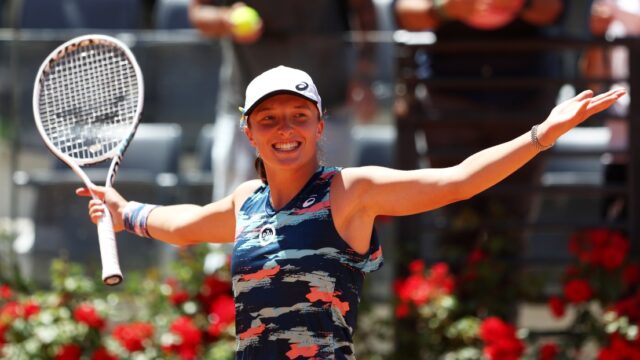 World No. 1 and defending champion Iga Swiatek advanced to the final of the Italian Open on Saturday in a bid to win her fifth consecutive tournament after her successes in Doha, Indian Wells, Miami, and Stuttgart.

The 20-year-old Polish, the big favorite of Roland Garros (May 22-June 5), scored her 27th victory in a row by atomizing the Belarusian Aryna Sabalenka, seeded No. 3, in two quick sets 6-2, 6-1, on the clay of the Foro Italico.

The winner of Roland-Garros in 2020 will meet in the final the Tunisian Ons Jabeur (7th), victorious last week of the Madrid tournament in the absence of Swiatek, or the Russian Daria Kasatkina (23rd), opposed in the other semi-final on Saturday afternoon.

As in the final in Stuttgart, the fourth tournament to date won by Swiatek at the end of April, the Polish left no hope to the Belarusian, totally caught up in speed, demoralized by the accuracy of her opponent and physically diminished at the end of the match.

In Rome, the Polish woman returns after a short break to treat herself to “five or six days without the racket” and rest a sore arm. She has won four sets without leaving a set since the beginning of the week.

Swiatek’s last defeat was on February 16, in the 2nd round of the Dubai tournament, against Latvian Jelena Ostapenko.