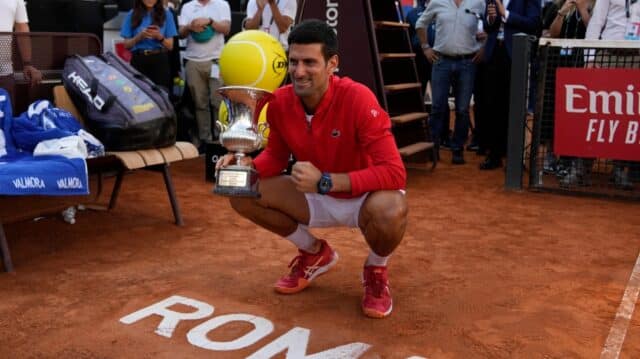 This week we are entitled to the last mark stop on clay before the Grand Slam meeting at Roland Garros.

The Masters 1000 in Rome is one of the tournaments in this category that I enjoy the most because the best give their all before the big event at the Porte d’Auteuil.

Besides, they are almost all very advanced in their preparation at this stage, so the players can offer a high-quality show by necessity.

How good it is to see how full the stands are, even archis full, while Italy, with its panoply of quality professionals and tournaments of all levels, has put the country back on the world map.

Novak Djokovic promised us that he was happy with his progress since returning to play at the end of February in Dubai at the beginning of the tournament.

He even considers that he should have beaten Carlos Alcaraz in Madrid.

His goal is to go very far in Rome, which is very logical if we consider that he played this Sunday, the 12th final at the Foro Italico in his career, which is mind-blowing!

In front of him was the Greek Stefanos Tsitsipas, whom he beat in 5 sets in the final last year at Roland Garros.

The battle is uneven, while Novak is untouchable in the first set. Tsitsipas seems so tired that he struggles to get to the ball and center it well.

That being said, I don’t think I’ve seen Nole play so offensively on clay.

At the beginning of the second set, Djokovic loses his energy as he did in the quarters and semis. This is the bad news that can be explained by the fact that he has only played 15 games this year.

However, the good news is that he managed to reverse a 2-5 deficit to win in two sets. This is the sixth title at the Foro Italico.

Related
King Of The Court Says Goodbye To Tennis

We will have to see how he behaves in the best of five sets. He is still the favorite for the title.

I cannot ignore the sad exit of Rafael Nadal while Denis Shapovalov controls his emotions enough to show him the exit door in 3 sets.

He is worn out, our beautiful Rafa, and the pain he experiences in his foot is unbearable. Is this the end for this magnificent champion?

He says he is disgusted to suffer and eat anti-inflammatories. We are a week away from Roland Garros, and he plans to show up, accompanied by his two doctors. Fingers crossed…

Félix Auger-Aliassime amazes me this week as he plays the fourth tournament on clay and his game finally settles on this surface.

We are talking here about a beautiful mixture of aggression and constancy while expressing ourselves according to his gifts.

Not easy, admit, to play the first match against the finalist of Monte Carlo and an excellent player of the slide Alejandro Davidovich Fokina.

Our Quebecer will look for a great victory in three sets. The more the match progresses, the better Felix is as he snatches the tiebreaker of the second set, which gives him a nice momentum for the third set, which he wins quite easily.

Felix fought well after Novak in the quarters but was broken late in each set. The good news is that in each set, from 5-3 for Djokovic.

We see the BEST of our Quebecer, who manages to pick up and take us further. The level of play is incredible, the pace is very high, and in the end, he does not lack much to take the match further.

Ultimately, that’s the challenge, and it was the same in Madrid in front of Zverev: start the match with the right intensity and keep the dragee high.

I am sure it will come, because the game of a Dantesque level, he carries it in him!

This week, a news item caught my attention as Naomi Osaka left the mega-agency IMG to form her own Evolve.

“I want to do things my way,” she tells us. This is the next natural step in my journey as a sportswoman and a businesswoman.

I like Naomi because of her talent on a tennis court and because she is so true and honest.

I wish her to find her place through the difficulties she is experiencing because I know that she is well-intentioned and can do a lot of good around her if she manages to overcome her fears.

Being humble enough to share your troubles is good, but it’s even better to offer a living testimony on the way out.

Let’s go with the quotes that have caught my attention in the last few days. Stefanos Tsitsipas tells us that he has found a way to get the adrenaline pumping.

“Yes, I am engaged in a new Monaco activity that helps me better control my fears. This is a sport prized by many people of my age: cliff jumping.

Franck Ramella of the Journal l’Equipe comments in a fairway on the efforts of Denis Shapovalov, who is involved to the maximum against Rafael Nadal and Casper Ruud, but without success hoped for in front of the Norwegian.

“Ruud, who is slow to fuel this season on earth, has been able to cope with the chivalrous irregularity of the Canadian.”

Denis indeed gives himself fully to remind us of the heroic and generous character of the fighters of the Middle Ages. Too bad it lacks a bit of consistency…

At the beginning of a tournament, we are entitled to hear what the best have to say about what just occurred and what is to come in Rome.

After the tournament in Madrid, everyone is ecstatic at the performances of Carlos Alcaraz.

Félix Auger-Aliassime says that he wants to “be more creative on earth and that precisely, by analyzing the performances of the young Spaniard, it takes everyone higher.” This is the most positive way of looking at things.

Andrey Rublev amazes me with frankness when he tells us this:

“What I like about Alcaraz is that he loves tennis, while most players are in love with themselves through tennis.” Not crazy at all as an analysis…

With that in mind, we invite you next Sunday to start the world’s biggest clay tennis tournament: Roland Garros! Until then, have a great week!