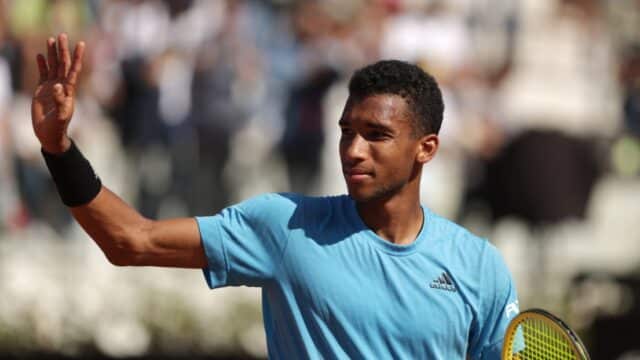 Felix Auger-Aliassime could face Rafael Nadal in the round of 16 at the Roland Garros?

Novak Djokovic, Rafael Nadal, and the young Spanish phenomenon Carlos Alcaraz, the three main favorites, have been poured into the same half of the table of Roland-Garros, which begins Sunday, according to the draw made Thursday in Paris.

As early as the quarterfinals, world number one Djokovic could face the thirteen-time winner of the Paris Grand Slam, Rafael Nadal.

The winner would potentially meet Alcaraz, at the gates of the top-5 at 19, in the semifinals.

Before that, Nadal could face Felix Auger-Aliassime (No. 9) in the round of 16. In the sixteenth final, the Quebecer will cross swords with a player from the qualifiers and potentially the American Reilly Opelka (No. 17).

The other Canadian in contention, Denis Shapovalov (No. 14), will play his first game against Denmark’s Holger Rune. He finds himself in the same table portion as world No. 4 Stefanos Tsitsipas.

On the Parisian clay, Djokovic is looking for a 21st Grand Slam trophy that would allow him to equal the record held by Nadal since his coronation at the Australian Open in January.

The Serb will celebrate his 35th birthday on Sunday and start his fortnight against Japan’s Yoshihito Nishioka. Soon to be 36 years old, the Mallorcan will start against the Australian Jordan Thompson.

Alcaraz, who is experiencing a dizzying spring with his first two Masters 1000 titles in Miami in early April and Madrid in early May, plus a success in Barcelona in the meantime, will be pitted against a player from the first round qualifiers.

Like world No. 3 Alexander Zverev, the Spaniard’s potential opponent in the quarterfinals.

In the other half of the table, the theoretical semifinal would pit Tsitsipas, the outgoing finalist, against No. 2 Daniil Medvedev, who has just returned after a hernia operation in early April.

Previously, the Greek could face Norway’s Casper Ruud in the quarterfinals and the Russian against his compatriot Andrey Rublev.

On the women’s side, Leylah Fernandez will start her tournament against the local favorite, Kristina Mladenovic. The Quebecer, 17th seed, has never crossed swords in her career against Mladenovic, 110th in the world.

For her part, Ontario’s Bianca Andreescu, ranked 72nd in the world, will face a qualified player in the first round. The 2019 U.S.

The open champion could then face Fernandez in the third round.

However, she will have to win against Australia’s Seone, 223rd in the world, in the third and final qualifying round on Friday morning.

Besides, Naomi Osaka’s return to Paris is tough as she will face the player who beat her at the Australian Open, Amanda Anisimova.

Osaka has won four career Grand Slam titles and has already ranked first before plummeting to 38th due to an extended break in her activities.

In particular, she took a break to rebuild her psychological health after withdrawing from the Roland Garros tournament before her second-round match last year due to symptoms of anxiety and depression.

Since she is not a seed at the France Open, she could have faced a seed in the first round. This is why she will cross swords with Anisimova (No. 27).