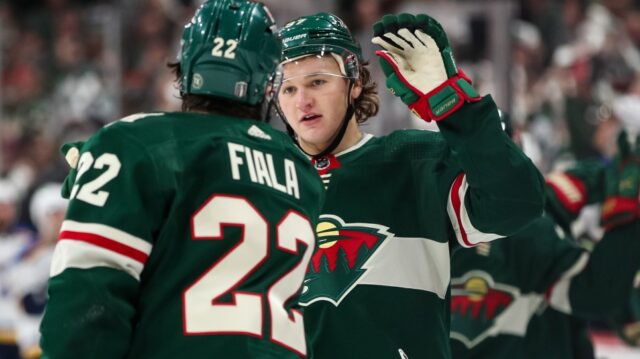 The Minnesota Wild tied the series 1-1 against the St. Louis Blues with a 6-2 win Wednesday night.

They also had a great moment when Kirill Kaprizov completed the first hat trick in Wild history in the playoffs.

The Wild scored their first win against St. Louis this season after losing all three games during the regular schedule.

After being shut out in the first game, the Wild were the first to score in the second game. Joel Eriksson Ek took advantage of a turnaround from St Louis to open the brand.

Then less than four minutes later, Quebec’s Frédérick Gaudreau hit the nail on the head to double Minnesota’s lead with a return in front of the net. It was the fifth series goal of his career.

The Wild had their lesson from the first game and wanted to avoid falling back into the same wheel. Before the end of the first period, Kirill Kaprizov added Minnesota’s third net.

Meanwhile, Quebec goalie Marc-André Fleury was perfect with ten saves in front of his net.

The Wild’s three goals tied a team mark in a playoff game in the first period. Minnesota had achieved the feat in 2021 against Vegas.

Eriksson Ek came back in the first minute of play in the middle period. He took advantage of a turnaround to recover the puck and serve a succulent feint to Ville Husso to bring the score to 4-0 Wild.

The Blues finally offered a reply midway through the second engagement. Jordan Kyrou scored his team’s first goal on a numerical advantage to reduce the gap to three goals.

Then the gap was reduced to two goals when Vladimir Tarasenko hit the target early in the third period.

The Wild, however, dampened the momentum of their rivals when Kirill Kaprisoz gave his team a three-goal lead midway through.

While Ek thought he had scored a hat-trick, his goal was reversed. But a few moments later, Kaprizov took over to officially complete the hat trick under another shower of caps, the right one.

The last series won by the Wild was against the same Blues in 2015, when Minnesota had the upper hand in six games.

The two clubs will face off again on Friday for Game 3.