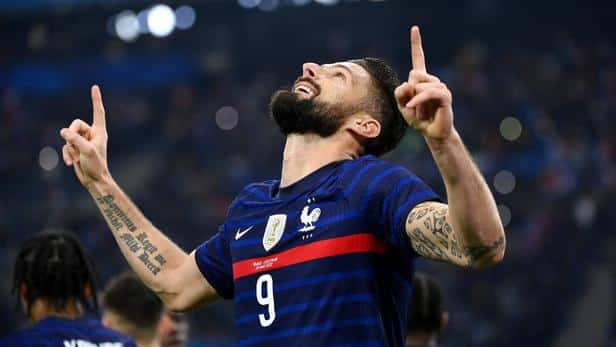 The weight of Giroud, the beautiful Ivory Coast, the cheers and whistles of the Velodrome … Find the good and bad points of our special envoy in Marseille.

Giroud is a must for the Blues

He was expected, he did not disappoint. With his 47th goal in selection (Henry has 51), a furious head, he succeeded in his evening and launched his mission redemption with a coach who expects a lot from him in terms of mentality.

Brawler, available and valuable on defensive stopped kicks, Giroud did not deserve. It’s up to him to continue Tuesday in Lille against South Africa.

The idea is not to say that he must take the place of Mbappé and Benzema, but behind them, by his profile, CV, and experience, he deserves his place in the group.

Chuameni has taken on another dimension

Beyond his goal at the end of the match – which offers victory to the Blues – the Monegasque made a beautiful copy on Friday night.

Available, aggressive, valuable in recovery, he formed a good duo with Pogba in between. Do not forget that this boy discovered the selection last September and has only 8 selections. Yet it sometimes gives the impression of being there for 10 years…

The cheerfulness of the Velodrome for Saliba and Guendouzi

If the Parisians were whistled (see below), the Marseillais lived their “best life” Friday night. In place of Raphael Varane at the hour of play, William Saliba and then Matteo Guendouzi (author of the decisive corner) received the acclamations of the Velodrome on each of his catches. For eternal memories.

Eliminated from the 2022 World Cup race, Ivory Coast made a great impression on Friday night and would have largely deserved the draw with the world champions.

Pépé, Haller, Zaha, Kessié, Seri, Bailly, Aurier … The Elephants do not lack talent and have moved the Blues at the Velodrome well.

“It’s a very good team,” said Hugo Lloris, surprised not to see them in Qatar. “Tonight (Friday), I’m proud; we showed that we have a great team capable of competing on what is best in the world, says coach Patrice Beaumelle. As long as I am at the head of this team, I will not give up, and there is a soul in this team. »

Whistles for Mbappé-Rabiot and Kimpembe were not helpful

It was expected, and we would have done well. Whether it was during the announcement of the team composition just before kick-off, when Rabiot entered the game at the end of the match, or when the giant screen of the Velodrome lingered a little too much on Kylian Mbappé, the Marseille public did not stop whistling the players (Mbappé, Kimpembe) or former PSG players (Rabiot, Nkunku). Didier Deschamps was certain that this would not happen; it was missed.

What is Deschamps playing with Giroud?

A few months ago, he would have climbed the curtains to defend Olivier Giroud’s failure at his club and scorer with the selection.

Since then, the Euro has passed, Benzema has returned, and Didier Deschamps did not appreciate Giroud’s sentence towards Mbappé. Bim, eight months in a closet.

After forfeiting Madrilène and Friday night in the spans of the Velodrome, the coach recalled the Milanese with the Blues, and he did not jump to the ceiling when greeting the 47th goal of his former lieutenant.