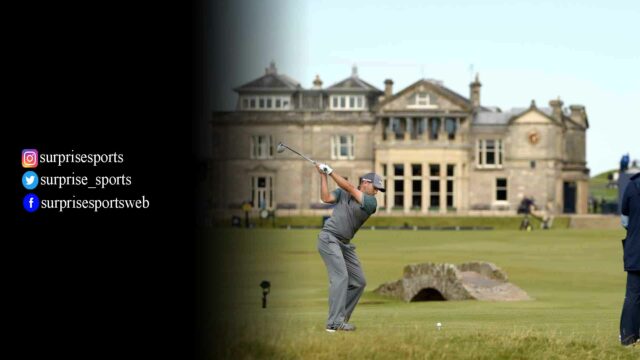 Yesterday Tuesday, the Open Championship found its last two qualifiers for the final round. Marcus Armitage and Sam Bairstow have enlisted their name among the final 16 qualified players fourth major golf tournaments.

Armitage and Bairstow are seated at the topped on the scoreboard with an eight-under-par total of 136. Armitage earned the place by winning DP World Tour. And Bairstow’s luck opened up at Royal Lytham & St Annes while playing the Amateur Tournament. He defeated South African Aldrich Potgieter and end with a runner-up trophy.

It’s gonna be the third time appearance for Armitage in the Open Championship. In the last two appearances, he carded two rounds of 68 that secure his place on the tour. And history repeated for the English amateur Bairstow. This will be his second time appearing at the fourth major golf tournament. Last year he earned his place in the Open Championship from the same venue.

They will start the game with Matthew Jordan. Jordan got third place in the qualifying stage with one stroke behind on a seven-under-par total of 137. He won the St Andrews Links Trophy as an amateur and put together rounds of 69 and 68. This opened up the door of the British Open for him. In the next month, Jordan will play his career first major tournament.

The fourth qualifying place was tied between John Perry and Daniel Kay. Perry separated himself from Kay and placed him above Kay after his par at the second play-off hole.

Barclay Brown got the clubhouse lead on a four-under-par total of 140. He earned the place from Hollinwell after setting an early pace rounds of 68 and 72. Richard Mansell followed the same path for the entrance pass of The Open. He got that by qualifying at Hollinwell for the second consecutive year.

Next, Matthew Ford will debut his major championship with The Open. He put behind Jamie Rutherford and Irishman Ronan Mullarney with two clear shots. In a play-off match to decide the Open qualifier, Matthew Southgate came as the first.

Ireland’s star David Carey finished Fairmont St Andrews at the topped and got the opportunity to make their debut with The Open. And Richard Dinwiddie will make his return to the Open Championship after his last appearance at the Royal Birkdale in 2017. Holland’s Lars Van Meijel and Alex Wrigley earned the last two spots after a three-way playoff win against the two-time DP World Tour winner Aaron Rai.

Results of 16 Qualifiers of 150th The Open Championship from 288 starting filed at 4 Venues:

The Open is one of the most prestigious golf in the whole world. It’s the fourth and final major tournament of the season. The reason for calling the tournament “Open” is because it’s open to all, both amateurs and professional golfers can earn a place in the Open Championship with their qualifications. The tour is set to take place from 14 to 17 July in Old Course at St Andrews, Scotland.

Here is the final list of 16 qualified players for tournament.