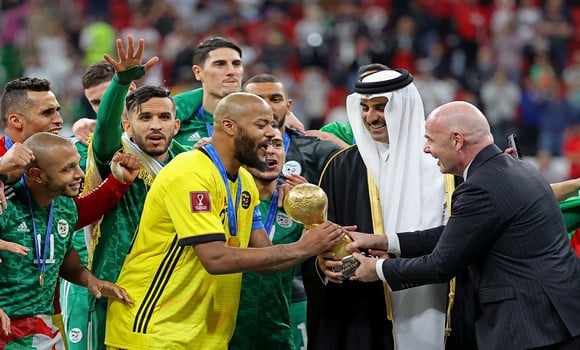 With six months to go before the 2022 World Cup in Qatar, the Chilean Football Federation has sparked controversy after allegations of serious irregularities involving Ecuador squads during the qualifiers.

Ecuador allegedly hid the real identity of one of their call-ups, a player named Byron Castillo. Chile has already reported fake documentation to FIFA, claiming they will make Ecuador’s place in the World Cup.

Eduardo Carlezo, a lawyer for the Chilean Football Federation, told Marca that Castillo’s documents were fake, noting that the player was Colombian.

Castillo has played eight matches against Ecuador in the World Cup qualifiers, two of which are against Chile.

With six months to go before the 2022 World Cup in Qatar, the Chilean Football Federation has sparked controversy after allegations of serious irregularities involving Ecuador squads during the qualifiers.

Ecuador allegedly hid the real identity of one of their call-ups, a player named Byron Castillo. Chile has already reported fake documentation to FIFA, claiming they will make Ecuador’s place in the World Cup.

Eduardo Carlezo, a lawyer for the Chilean Football Federation, told Marca that Castillo’s documents were fake, noting that the player was Colombian.

Castillo has played eight matches against Ecuador in the World Cup qualifiers, two of which are against Chile.

“We’ve thoroughly investigated the case to find out where the player was born, and we’re clear – he was born in Colombia.

“What we are clearly saying is that Byron Javier Castillo Segura was born on July 25, 1995, in Tumaco, Colombia, and Byron David Castillo Segura, who was born on November 10, 1998, does not exist; he is a ghost. It is a forgery and Even a crime by Ecuadorian law. ”

Carlezo provided more information on how the documents were forged, starting with a now-defunct football club in Ecuador.

“Based on the documents in the case, there is a powerful account of how to document forgery began in Ecuador,” Carlejo added.

“You have to remember that it all started with a deep plan to forge and falsify player documents. It all began in 2012 with a club called Norte America in the province of Guas [Ecuador]. Exactly, there was Byron Castillo. Was registered.

Related
How to Watch the FIFA World Cup in Hong Kong

“The Ecuadorian Federation itself has designated the club as a center for player document fraud in Ecuador, and it has since been suspended. Several employees have also been arrested for this.”

The Chilean federation has also asked FIFA for a hearing on the seriousness of the incident, asking the player to comment on the matter. FIFA has not yet commented on the allegations.

Will Chile be able to play World Cup in Qatar?

A few months before the start of the tournament, Chile was shocked by the scandal that affected the World Cup. Despite Ecuador finishing four in the qualifiers, Chile are now looking for a place for La Tri in the World Cup in Qatar.

The Ecuador Football Federation has stated in response to the Chilean Football Federation’s claim that they will be “ready to show FIFA or any other body that we have worked legally and that our meritocracy is the result of the 2022 World Cup in Qatar.”

Chile has called on FIFA to replace Ecuador at the World Cup, claiming they have selected ineligible players.

The South American country believes that they have unjustly deprived Qatar of the opportunity to secure a place in 2022.

Chile has made a shocking request to FIFA to allow them to qualify for the 2022 World Cup at the expense of Ecuador, who has been accused of fielding an ineligible player to qualify.

The man in question is defender Byron Castillo. He is said to have been born in Colombia three years before the date mentioned in the document, which allowed him to be identified as Ecuadorian.

FIFA regulations state that the use of an ineligible player could result in a confiscation penalty, and Chile hopes this will prove to be the case as they seek to secure their place in Qatar.

Related
How to Watch the FIFA World Cup in France

Does Chile have a lawsuit against Ecuador?

An extensive investigation conducted over several years has resulted in banning 75 young players who were registered in Ecuador using false records.

Since appearing on the senior scene, Castillo has been part of that process, with Chile having a lawsuit to answer.

“How can we not work with this level of evidence in our hands?”

Pablo Milad, president of the Chilean Soccer Federation, added: “We understand that, based on all the information and documents collected, the incidents are severe and must be thoroughly investigated by FIFA.

“We have always respected fair play principles, and we hope other federations will do the same.”

Ecuador was initially wary of fielding Castillo, expressing concern about his refusal to leave the documentation. Carlos Manzur, vice-president of the country’s football federation, said in March 2021: “I think it’s a matter of avoiding problems and playing safely.

“I think he is a good player. If it depended on me, I would not have been able to play for the national team. I will not take that risk. We will not take risks in everything we do.’’

Why does Chile claim a place in the World Cup?

Ecuador finished fourth in the Conmebol division of the World Cup qualifiers, giving Qatar an automatic path to the final.

Chile is seventh with Peru, heading for an intercontinental play-off – and Colombia is top of the 10-team group stage, but Castillo has not played against any of those countries.

However, he did line up against Chile, and they suggest that the six points they have played in these games should be given to them now – a situation that could result in Ecuador losing their place in Group A at the 2022 World Cup along with Senegal, the Netherlands, and the the host Qatar.

This year, there have been several other incidents when countries have been asked to take action by FIFA for alleged misconduct.

The Chilean Football Federation has called on FIFA to investigate Ecuador, claiming that Ecuador fielded an ineligible player during the World Cup qualifiers.

Chile says it has sent documents to the FIFA disciplinary committee showing that Ecuador winger Byron Castillo used “incorrect birth certificates, false statements of age and false nationality,” was born in Colombia, and is older than his Ecuadorian document list.

Related
How to Watch the FIFA World Cup on Firestick

The Chilean federation said: “All of this was, of course, fully known by (the Ecuadorian Federation).” There must be a fair play on and off the field when talking about a world competition. ”

With fourth place in the World Cup qualifiers, Ecuador has claimed South America’s last automatic berth in the 2022 World Cup. Chile is seventh behind Peru, who will play in an intercontinental play-off in June, and Colombia.

Castillo played in eight qualifiers; he did not play in Ecuador against Colombia or Peru but in both games against Chile (one draw and one Ecuador win). If Ecuador had to lose those games for fielding an ineligible player, five added points would theoretically be enough to tie Chile in oints with fourth-placed Peru in the qualifiers.

The Ecuadorian Federation later issued a statement saying that it would prove to FIFA Bayezko or any legal entity that its eligibility campaign had been conducted fairly, stating that Castillo was an Ecuadorian citizen and qualified to play for the team.

This is not the first time a problem has been raised with Castillo. The New York Times reported that Ecuador had previously stopped playing Castillo this year due to concerns over his qualifications.

“I think it’s a safe game, a matter of avoiding problems,” Carlos Manzur, vice president of the Ecuadorian Soccer Federation, told the Times last year. “I think he is a good player. If it depended on me, I would not have been able to play for the national team. I will not take that risk. We will not take risks in everything we do. ”

Three World Cups have yet to be named just around the corner from the June playoffs. Peru will play either the United Arab Emirates or Australia; New Zealand will face Costa Rica and Wales, and Scotland or Ukraine will be eliminated from the rest of the European playoffs.

Meanwhile, Ecuador’s preparations for the World Cup continue. It was announced on Thursday that La Tri would play Nigeria and Mali in a friendly match in the United States next month. Ecuador drew in Group A with hosts Qatar, Senegal, and the Netherlands.

How to Watch the FIFA World Cup Without Cable

How to Watch the FIFA World Cup on Firestick

How to Watch the FIFA World Cup on Android Phone, Tablet, or TV