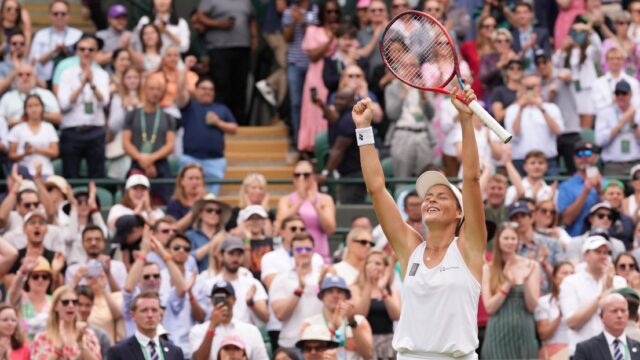 Germany’s Tatjana Maria pulled off another breakthrough at Wimbledon. On Sunday, she reached the quarterfinals of a Grand Slam tournament for the first time in her career at the age of 34.
She will not face another seed but rather her 22-year-old compatriot Jule Niemeier. She is participating in the tournament at the All England Club for the first time.
In the second week of Wimbledon activities, only two of the top 15 seeds remain in the main draw. And only one major title holder — Simona Halep.
Maria ousted 2017 France International champion Jelena Ostapenko 5-7, 7-5, 7-5 in the fourth round. She saved two match balls in the second set against the 12th seed.
Halep, the 16th seed at Wimbledon, won this tournament in 2019 and the France International in 2018. She will meet Spain’s Paula Badosa in the fourth round on Monday.
Niemeier, the 97th racket in the world, surprised the local favorite, Heather Watson, 6-2, 6-4 on Centre Court. The German also defeated second-seeded Anett Kontaveit in the second round.
Earlier on Sunday, Czech Marie Bouzkova became the first player to reach the quarterfinals.
Bouzkova beat France’s Caroline Garcia 7-5, 6-2 in the fourth round. And reaches to the quarterfinals of a Grand Slam tournament for the first time in her career.
The 23-year-old will meet in the next round with the duel winner between the third seed, Ons Jabeur, and the Belgian Elise Mertens.
Bouzkova surprised seventh-seeded Danielle Collins in the curtain-raiser of the grass tournament.
It’s worth noting that Canada’s Gabriela Dabrowski and her mixed doubles partner. Australia’s John Peers, reached the quarterfinals after defeating Brazil’s Bruno Soares and Beatriz Haddad Maia 4-6, 6-3, 6-0.
However, Dabrowski and her Mexican playing partner Giuliana Olmos folded 6-4, 6-3 to Americans Collins and Desirae Krawczyk in the knockout stages of the women’s doubles.