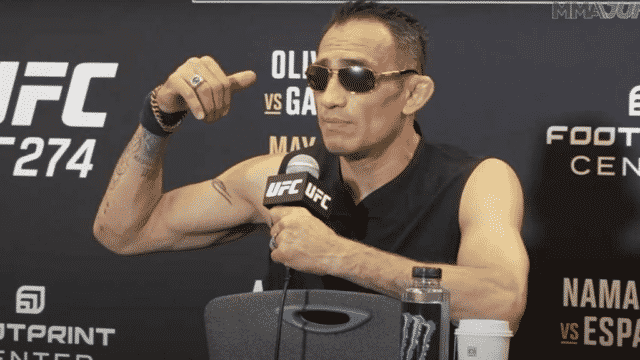 Tony Ferguson fiercely criticized Dana White during his pre-fight press conference on the sidelines of UFC 274.

Tony Ferguson will face Michael Chandler this weekend at UFC 274. He wants to make his wrestling qualities speak to win this fight.

Tony Ferguson is in a negative spiral on a three-game losing streak in the UFC, but despite this, Michael Chandler does not take him lightly and believes that Ferguson has not lost his hand.

“Dana said something the other day saying that boxers are overpaid. I asked Dana to box, and he said, ‘put***’ no, I said, ‘why I want to play baseball, I want to go to other pro sports, I’m an athlete.

I grew up in different sports at a very high level and won a state football championship ring. I’m from Grand Valley State University and a wrestler. I want to do professional wrestling. I have Brock Lesnar, my uncle Brock watching me.

I want to do all these things, but this guy here behaves like a drug dealer and tells me I can’t go and controls everything I do.

“You earn your money by winning, showing yourself, and performing well. I guess we’re paid in crypto; they’re following the trend.

They wait for everyone to express themselves; they stay all the time like this. I am waiting for insurance. I’ve been in this sport for a long time, I had a bad fall, and they took my title.

“Then, when it comes to this, and I’m stripped of my title because I had a bad fall by accident, I should have filed a complaint.

But what I did was I felt suitable for my company; I wanted to be a man, to make sure everyone knew I could get by without anyone’s help.

So, it’s a little weird to keep coming here, smiling, and seeing that they use my image on the poster as if I have great value. When I saw that the UFC didn’t think my value was so high, I had to increase it in other ways, including social media.

Ferguson ended with a shocking sentence aimed at Dana White:

I take this weekend very seriously. I’m going to kick this Dana White’s c** and show her who I am.

Ferguson looks very upset about the treatment he receives from the UFC. Will this resentment turn into positive energy to beat Michael Chandler in the UFC? Answer Sunday…

Do you agree with Tony Ferguson’s statements?