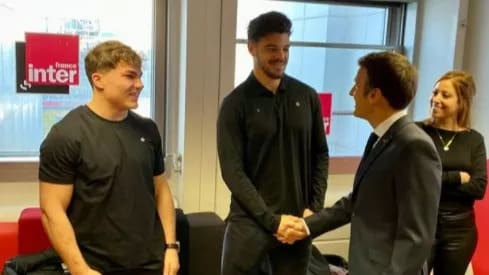 The two stars of the Stade Toulousain and the XV of France met Macron the President of the Republic, this morning on the premises of France Inter.

This Monday morning, Antoine Dupont and Romain Ntamack were the guests of the morning of France Inter on the occasion of the release of the film Le Stade (April 13 at the cinema), retracing the Toulouse epic 2020-2021.

The next guest of Léa Salamé and Nicolas Demorand was the President of the Republic. So they crossed paths in the corridors of the public radio for an exchange of a few minutes, of which nothing filtered.

Emmanuel Macron, who had already visited the Blues, Marcoussis, last November before the clash between the XV of France and the All Blacks, certainly had to congratulate the two Toulouse for the recent Grand Slam of the Blues.