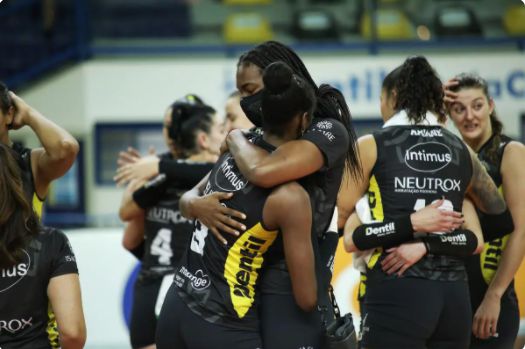 In the last game of the qualifying round, Praia Clube beat the only team that had not yet surpassed in the Superliga season.

Barueri, who beat Praia in the first round, was the only superleague club that the Minas Gerais did not yet surpass. For Praia, the result does not change the position and location of the playoffs.

One of the game’s highlights was the return of Libero Suelen from Praia, who had been sidelined for injury treatment for more than three months.

Ju Perdigão had replaced her. With the return, Praia enters the knockout round with all squads available to coach Paulo Coco.

The Viva Vôlei trophy was with central Carol, one of the season’s highlights.

The São Paulo team came up with the proposal to force the saque a lot but exaggerated the errors, delivering many points of grace to the opponents.

With a good distribution of the ball of the lifter Claudinha, Praia had no difficulty printing his pace of play, while one of Barueri’s main weapons, the efficient lock, did not find the mining balls.

Even more, accelerated in the second set, Praia managed to open ten points lead entering the final stretch of the partial. Barueri’s young women, demonstrating to be very tense on the court, continued to make many mistakes, facilitating the sequence of points of a Beach that was already very effective.

Heading for the final stretch, Barueri’s block began to appear, especially with Lorena, of 1.90m, but Praia’s advantage on the scoreboard was too great for Barueri to seek the turn, even outlining reaction.

With no signs of slowing down, Praia remained dominant, forcing the soot and attacking with great aggression. At no point, even with the game dominated, coach Paulo Coco took the starters off the court, demonstrating intensity from start to finish.

Praia confirmed the victory with excellent collective performance and now leaves for the playoffs with a good sequence.

The Brazilian Volleyball Confederation (CBV) has not yet confirmed the start date of the playoffs, but the expectation is that the quarter-finals will begin next week.