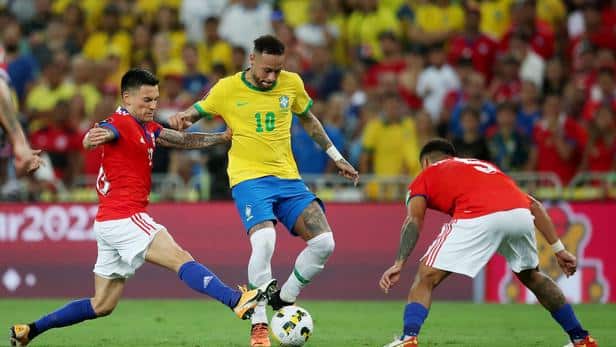 Scorer during the large victory of Brazil against Chile (4-0), the Parisian striker signed a great performance.

Nothing like a little trip to Brazil to forget the Parisian greyness! Neymar found a smile again in the Seleçao jersey by scoring in the brilliant 4-0 victory over Chile on Thursday at the Maracana.

This result practically seals the fate of La Roja, who will need a miracle on the last day of South American qualifying to compete in a play-off for the 2022 World Cup.

On the other hand, Brazil had already validated its ticket for Qatar as early as November.

By converting a penalty for a foul he suffered himself (44th), Neymar, who had missed the last meeting in the national team due to injury, scored at 30, his 71st goal in 117 games in the jersey of Brazil, six units from King Pelé.

The Paris SG striker was also decisive on the second Brazilian goal, with a call that took the Chilean defense on board, leaving the field open for Vinicius, who doubled the lead (45th+1).

But beyond these statistics, it is a balm in the heart that Neymar came to look for in Rio de Janeiro after being scolded by PSG fans after the elimination against Real Madrid in the knockout stages of the Champions League.

At the Maracana, he received a resounding ovation from the fans when the speaker chanted his name when the team line-up was announced.

A little tense at the beginning of the match, while the Seleçao suffered a big Chilean pressing, the Brazilian number 10 was annoyed when his free-kick exploded in the wall (7th).

Related
How to Watch the FIFA World Cup in the UK

But he quickly got his bearings, combining well with Paqueta in the axis and a twirling Vinicius on the left wing.

It had been done just before the break, on a justified penalty, after a tackle from behind by Mauricio Isla in the area.

Vinicius put Brazil permanently safe in stoppage time in the first half, his first goal in 12 games with seleçao, on receiving a good pass from Antony.

The latter also suffered the less obvious foul, leading to a penalty and the third Brazilian goal. Neymar could have come even closer to Pelé’s record but preferred to let his friend Philippe Coutinho, who has regained his colors since his transfer from Barça to Aston Villa, shoot.

The only shadow on the board for “Ney”: he will be suspended for the last day of qualifying, in Bolivia, because of a yellow card received after an altercation with Paulo Diaz.