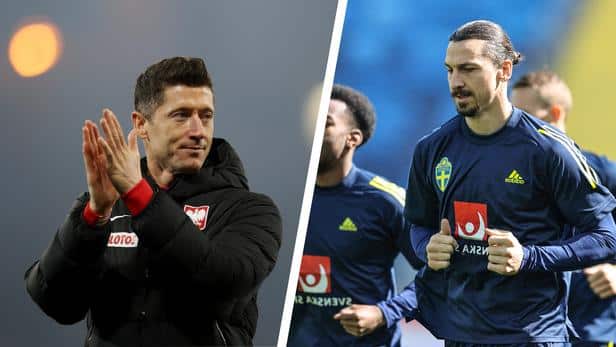 One of these two football monuments will see its world dreams fly away this Tuesday (20:45) during the Poland-Sweden play-off in Warsaw.

Erling Haaland, Jan Oblak, Marco Verratti… The list of big names who will miss the 2022 World Cup in Qatar is already substantial. It will be even more copious this Tuesday at the end of the evening, at the end of qualifying.

Cristiano Ronaldo (Portugal), Riyad Mahrez (Algeria), Sadio Mané (Senegal), and Mo Salah (Egypt) are among these stars in balance, the last two nominees competing with their respective selections on the side of Blida.

There will only be one left. The same goes for Robert Lewandowski and Zlatan Ibrahimovic in Warsaw.

Qualified for the benefit of Russia’s banishment for geopolitical reasons, Poland receives Sweden this Tuesday (20:45) during one of the three finals of play-offs in the European zone.

At the same time, Portugal will challenge North Macedonia, but it will take a few months to see Scotland face Ukraine (June?) for the last ticket.

On the other hand, the Swedes won theirs with a win over the Czech Republic last Thursday (1-0 ap), thanks to a goal scored by Robin Quaison at the end of the suspense, or boredom, if you will (110th).

Enough to ignite with happiness the 50,000 spectators of the Friends Arena, near Stockholm, and in particular “Ibra,” confined to the rank of the first supporter of the Swedish selection that evening because of suspension.

However, the former Parisian, aiming for second participation in the World Cup after… 2006, is not certain to start this Tuesday.

He even has every chance of starting on the bench, and it is a given that he will “not have 90 minutes in the legs”, who has played only 39 in four games in 2022.

Package for the Euro last summer, unavailable until September, and regularly forfeited in 2021-22, the Swedish giant has still managed to be valuable in the good course of his club in the league (18 games, 8 goals, 2 assists), AC Milan appearing at the top of the Serie A ranking, while often being overtaken in the Champions League (4 games, 0 goals, assists).

Related
How to Watch the FIFA World Cup on Xbox

The beginning of the end for Ibrahimovic? At 40, his best years are obviously behind him, who describes himself as “an old guy, but fit.”

His aura still allows him to be an asset, but as far as selection is concerned, the future is for the Forsberg-Isak-Kulusevski trio.

At the Qatari World Cup, the Malmö native will be 41 years old. “I’m here to help them move forward,” he said at a press conference before the Czech Republic, inviting everyone to “enjoy while (he is) on the lawn because you won’t see anything comparable.

You’ll see Elanga. I say that with all respect, but you won’t see Ibrahimovic anymore, so enjoy as much as you can.”

Elanga is Anthony Elanga, 19, Manchester United player and son of Joseph Elanga, with whom Zlatan played in Malmö in 2000-01.

Since then, “Ibra” has made the heyday of Ajax, Juventus, Inter, AC Milan, Paris, and M.U., before trying the American experience at the L.A.

Galaxy and returning to Milan, where he will probably extend for one more season in 2022-23. The last one?

I’ll play until I find it better than I, so I keep playing.

Whoever admits to being “afraid” of the post-football intends to “continue as much as possible and just enjoy.” If possible, by going through the Qatar box next winter, then.

“The future remains to be written. I don’t project myself. I don’t want to regret quitting football and telling myself that I could continue playing football because then I would regret seeing that I could have continued for the rest of my life.

I want to play as long as I can. The reality is that I will play until I find it better than me, so I continue to play, “said the third top scorer in the history of PSG (156 goals, behind Cavani and Mbappé) on the UEFA website, author of 62 goals in 120 caps with Sweden.

Related
How to Watch the FIFA World Cup in China

A total that could have been higher if the interested party had not cut for five years before making his return to the selection for the Euro, in vain.

In a friendly last Thursday, he spared against Scotland (1-1), Robert Lewandowski, him, a priori left to start this Tuesday. So much the better because Poland will already have to do without the Marseillais Arkadiusz Milik hit in Glasgow.

So much the better, too, because the Bayern gunner is in the sky of his career. If Ibrahimovic is on the downward slope, Lewandowski, 33 years old (74 goals, 128 sel.), is still one of the best strikers on the planet, if not the best.

Twice winner of the FIFA trophy for the best player of the year, failing to win the Ballon d’Or, he has already found the net 45 times in 37 matches with the Munich club in 2021-22. Monstrous…

The FIFA Trophy, in the absence of the Ballon d’Or

After breaking Gerd Muller’s record – which was thought to be untouchable – by scoring 41 times in 29 Bundesliga matches in 2020-21.

“If you had told me that a few years ago, I would have told you that it was impossible,” he said, “thanking” the late Müller, who died last August at 75.

“Without him, it would have been impossible, and he broke so many records… For all the next generations and me players, the goal was always to beat his records.”

Tomorrow, it will be to mesmerize those of Lewandowski, “a machine in the surface,” according to his teammate Manuel Neuer.

Less intelligent than Ibrahimovic, more discreet, the warsaw native has already participated in the World Cup. That was four years ago, in Russia, where Poland was due to play in their play-off semi-final.

Even before the decision of the international bodies, however, Robert Lewandowski had established that he had no intention of going to Moscow.

Related
How to Watch the FIFA World Cup on Playstation

“I can’t imagine playing a match against the Russian national team in a situation where armed aggression in Ukraine continues,” the Bayern Munich player wrote on social media; he has since broken off cooperation with Chinese telecommunications giant Huawei, accused of collaborating with Russia in the context of the war in Ukraine.

However, this Tuesday, in Warsaw, it will only be about football, not politics. With one legend who will have to make a cross on the Qatari World Cup and the other who will be gone to play what will probably be his last World Cup.

If he is still dashing, the Pole will indeed be 34 years old at the time of the tournament… It remains to be seen whether Robert Lewandowski or Zlatan Ibrahimovic will be at the party.