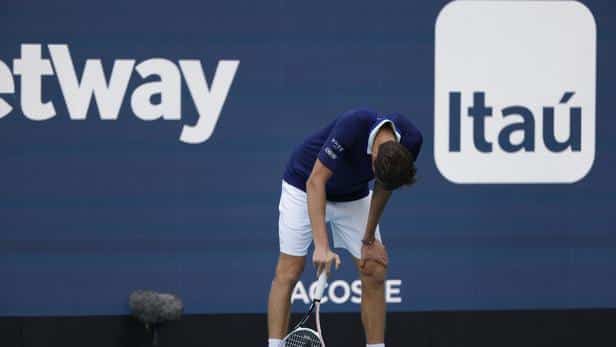 World No. 2 Daniil Medvedev will be absent from the ATP Tour for “probably 1 to 2 months” to treat an injury, announced Saturday the Russian, whose participation in Roland Garros (May 22-June 5) now seems very uncertain.

I have been playing for a few months with a slight hernia. We decided to solve this problem with a small intervention with my team.

Hi everyone. The last months I have been playing with a small hernia. Together with my team I have decided to have a small procedure done to fix the problem. I will likely be out for the next 1 – 2 months and will work hard to be back on court soon. Thanks for all the support.

I will probably be away for a month or two, and I will work hard to be back on the courts quickly,” Medvedev said on his Twitter account.

World number one for three weeks in early March before giving up his place to Novak Djokovic on the 21st. The 26-year-old Russian has since struggled to confirm.

Favorite of the Masters 1000 in Miami, the finalist of the last Australian Open was eliminated Thursday in the quarterfinals by the Polish Hubert Hurkacz, the holder of the title, losing 7-6 (9/7), 6-3.

During this match, he seemed physically diminished, taking a long locker room break between the two sets and requesting the intervention of the physio after being forced several times to lean back down on his racket to recover after the exchanges.

“Throughout the match, I was not at my best,” he confirmed at a press conference. “After the difficult points, I had difficulty catching my breath. I wasn’t recovering fast enough. Maybe it was the heat, but I was dizzy, and there was a game where I couldn’t serve anymore.

This defeat deprived him of the opportunity to once again take the throne of world No.1 from Djokovic. Only an accession in the last square would have allowed him to dislodge the Serb again.

Before that, Medvedev had lost in the semifinals in Acapulco to Spain’s Rafael Nadal, who had already beaten him in Melbourne, after suffering a surprise elimination in the 3rd round of the Indian Wells Masters 1000 against France’s Gaël Monfils.

The Russian won his first Grand Slam at the US Open last September, preventing Djokovic from achieving the calendar Grand Slam and being crowned for the 21st time in a Major, a record since Nadal reached the Australian Open.