Sexy cheerleaders are one more reason to be interested in the game. Not only are these dashing beauties amazingly enhancing the energy of the crowd but also offer refreshment from the game if it is getting too predictable or boring.  Here are the hottest NFL cheerleaders in 2023.

To know more about these amazing beauty queens, read on.

At number 1 in this list of top 10 hottest NFL cheerleaders in 2023, we have Sarah L. She is constantly trying to defeat her fastest mile when she is on the treadmill.

The beautiful dark-haired office manager is concentrating on mastering the dance moves that are required by the Flight Crew and she knows pretty well that her hard work will pay off. Fans would love to see her flaunting her talent for standing on her head. At number 2 in this list of top 10 hottest NFL cheerleaders, we have Brittany A. Brittany has been whipping Ravens fans into a frenzy for nearly two years. At just 5’1”, the wavy-haired blonde vixen from Annapolis appears big when she is performing her routines for the home team.

Brittany is now a senior graphics designer who has her eyes set on becoming a graphics marketing manager. When she isn’t working, Brittany enjoys water skiing, fishing, scuba diving, and painting. At number 3 in this list of top 10 hottest NFL cheerleaders, we have Summer. After graduating from Wesson High School, Summer attended the University of Missouri where she earned her degree in Healthcare Marketing. She would like to use her schooling to pursue an elaborate career in pharmaceutical sales.

When she isn’t on the field cheering on Drew Brees and company, Summer enjoys various things like photography, fishing, and making jewelry. She says that one of the greatest influences in her life is her former dance teacher who preached the value of good morals and honor. At number 4 in this list of top 10 hottest NFL cheerleaders in 2023, we have Jenna. The elegant dancer from Scottsdale has a Bachelor of Science from Arizona State University and aspires to be a physician’s assistant. Jenna’s red and white outfit goes suitably with her light silky skin and seducing red lips.

The self-proclaimed science nerd has a massive fondness for chemistry and biology. Jenna has a solid dance resume that includes six years at Arizona Angels Studio, four years of high school varsity pom and she has danced hip-hop as well for the Phoenix Sun’s Solar Squad. 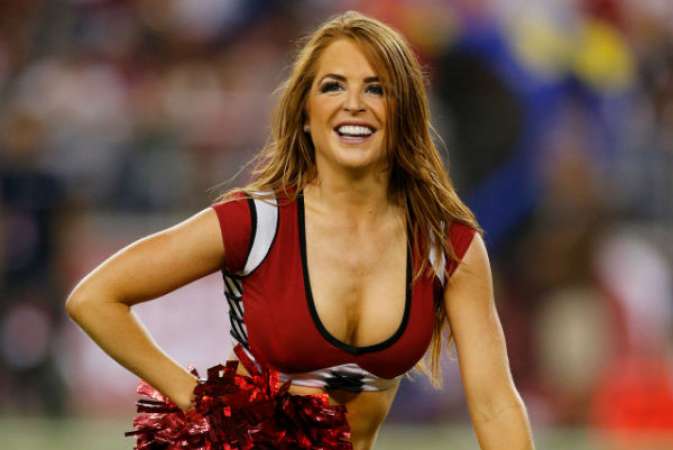 At number 5 in this list of top 10 hottest NFL cheerleaders in 2023, we have Kristen. While they have come close to a Super Bowl appearance in relatively recent years, the Cardinals organization remains stuck in one of the longest happening championship droughts in the history of the NFL.

Thankfully for those long-suffering fans, the Cardinals have some of the nicest-looking cheerleaders participating in football. Kristin is a gorgeous six-year veteran of the Cardinals cheerleading squad and she absolutely qualifies as one of the hottest in the NFL.

She was performing ballet, jazz, hip-hop, and contemporary dance when she was just 3 years old and she continued dancing through her school years. Kristen was on the Northern Arizona University dance team performing as both a dancer and a coach. She works for a laser aesthetics company and enjoys vigorous exercise, beach vacations, and Will Ferrell movies. At number 6 in this list of top 10 hottest NFL cheerleaders in 2023, we have  Melissa G. She’s an extremely attractive six-year veteran of the San Francisco Gold Rush cheerleading squad, and getting caught up in her bold and sexy appearance is understandable.

The boutique owner and marketing rep from Clovis, CA is superfluous in her cheerleading outfit and she can mesmerize the crowd as she jubilantly shakes her pom-poms. Melissa has a rather majestic smile and her firm body has curves in all the right places. At number 7 in this list of top 10 sexiest NFL cheerleaders in 2023, we have Gretchen. Gretchen tries to go to the gym daily while also mixing it up with a liberal type of yoga and jogging. She is also a firm believer in a balanced diet being essential to staying fit.

Gretchen has also been excessively involved in aiding the elderly and disabled. She spent a week on a reservation in Yakima where she had copiously painted houses, cleaned, and did a bit of construction. At number 8 in this list of top 10 sexiest NFL cheerleaders, we have Danielle. With her arresting blue eyes, warm smile, and killer figure, Danielle has been a known Dallas Cowboys cheerleader for four years.

It’s not just athletes that battle through injuries on game day, Danielle had to compete hard for her spot on the squad with a horrendous foot injury nearly two years ago. At number 9 in this list of top 10 hottest NFL cheerleaders in 2023, we have Jessica. We know that it is a very common practice for football players to switch teams via trades and free agency.

Her husband decided to follow his MBA at Vanderbilt and Jessica made the move with him. The vivacious veteran has a daily routine that begins with coffee and breakfast before she attends hot yoga at 5 am. Like most cheerleaders, Jessica has a lengthy background in dance with ballet being her favorite form. At number 10 in this list of top 10 sexiest NFL cheerleaders in 2023, we have Stephanie A. This rocking redhead has been a Buccaneers cheerleader for a long two years. Stephanie’s long background in dance started when she was just two years old. She was captain of both her high school and college dance teams.

Besides, she has been strictly involved in countless competitive dance competitions throughout her life. She works as a competent personal assistant and she holds a Bachelor of Arts in Psychology. Her bright blue eyes and well-proportioned physique get the attention of spectators.

She catches the most attention as she bounces up and down jubilantly on the sidelines. The Buccaneers might not be interesting to watch but it is absolutely worth the price of admission. And, it is just to witness Stephanie work for the crowd.

Q. Can an NFL player date a cheerleader?

A. Not at all. There is nothing easy about being a cheerleader! Cheerleaders in the NFL aren’t allowed to “fraternize” with the players. The NFL forbids flirting, personal relationships, friendships, or any behavior that resembles an outside relationship outside of work.

Q. How much do you have to weigh to be an NFL cheerleader?

A. Maylin Tsang said that “I was told that I had to weigh 122 pounds by three days before the first game, even though I had never been measured for body fat or height. It’s common fact that you must be good in shape if you are going to be a cheerleader.”

Q. How tall do you have to be to be an NFL cheerleader?

A. You do not have to specify your height or weight. It is, however, a requirement that you be in good physical condition. It takes a lot of energy and stamina to cheer through an entire football game, and rehearsals last three to four hours, two to four times per week.