A perfect forehand shot can help you take the lead in the game. So today, we’ll demonstrate the best steps to take for a powerful forehand. Forehand shot plays a crucial role in a player’s overall performance. So it should be perfect by all means.

The forehand is a shot performs by the dominating hand. It’s a short where your inner palm works to get the ball in the desired direction. For a beginner, the forehand must be the most pivotal element to keep the game going fairly. Most players don’t use this shot as an opportunity to overpower the opponents. There are many ways to execute a forehand shot, and some are not what we’ll recommend. As a result, players must grasp the steps to execute forehand perfectly. 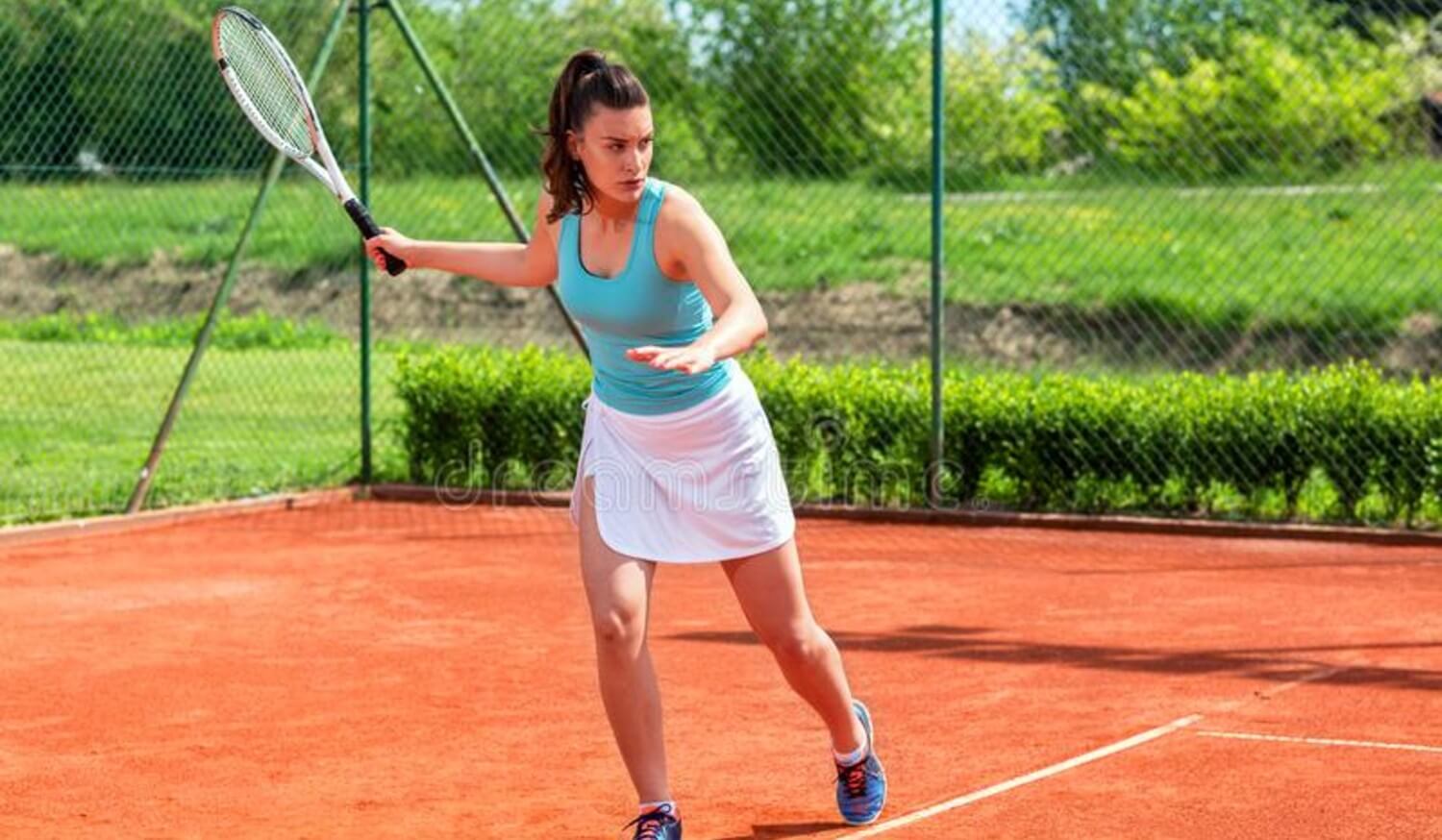 Players will need to have a balanced grip to excel in a powerful forehand shot. First, let’s understand the gripping style that you will need to follow for perfect execution. Three grips will help you perform the forehand shot. Besides, a good tennis overgrip can also help you achieve a better traction.

There is an eastern grip, a semi-western grip, and then the western grip. You’ll be using them, and then comes the body positioning. Players will position their bodies in the direction from where the ball is approaching.

Players will have their shoulders in a sideways position for agility. They will get to the ball quickly if they follow this body positioning for the forehand. And then, the players will need to keep their knees bent a little.

Backswing comes as a chief element of a powerful forehand. You can ruin the whole execution if it’s not done the way it should be. Now let us give you a brief insight about the body positioning for a promising backswing or drop:

Your elbow will assist the back positioning of your tennis racket. Your racket should be back facing your body a swing drop. Then, bring the arm positioning closer to the body. You’ll then have to adjust your upper body part to the sideway direction.

Related
How Big Is A Soccer Field? Detailed Answer With Dimensions

Players will have a slight bend on their legs to shift the weight to the ball. Your arms must be out for balancing the shot. In addition, your shoulders are supposed to face the direction of the net section.

This will allow for greater precision in approaching the incoming ball. You’ll then have to shift your weight onto your facing body part, the legs. This will allow for a powerful hit overall. But yes, you do need premium-quality tennis shoes to achieve perfect balance during the shot.

It seems like you are in a good position to execute the forward swing now. This process begins as the ball has come in contact with your court’s ground. You’ve already stretched your arms to a great deal. This helps players working ideally with gravity.

And then, players will have their wrist ready to move, best to keep in a loose state. You can also use high-quality tennis sweatbands to keep your wrist and forearms steady. They will use gravity as a special tool for attaining the maximum speed value. Accelerate as you see the ball coming in your direction.

The bottom of your racket must be facing the ball’s direction. You’ll get the most out of your forehand shot if you rightly position your upper body. The upper body must be in the left position for a strong forward swing blow.

Players will have to understand that gravity is going to speed them up. So use gravity as a tool to address the shot to maximum speed value in this case. In fact, this is one of the best steps to take for a powerful forehand during the match.

Many players use their set of techniques and come up with a better outcome. It’s not always about following what’s being said, and sometimes you have to follow your style too. Try to find the perfect body positioning you can rely on.

Build your strategies and natural body positioning where you perform the best. Only then you’ll be able to give your best in the game.

You can also try practicing with top-rated tennis ball machines to achieve perfection in various shots.

This is the deciding factor to bring about the outcomes for your powerful forehand strike. It is also a part of very important considerations in a forehand shot. The players will have to approach the ball where their bodies face. But remember, balls made for hard courts will come much faster than the balls made for clay courts.

Related
How To Maintain Your Baseball Bat For Optimal Performance?

You’ll have to keep in mind that your distance shouldn’t be too long. Also, if the distance is minimal, then you will have a very compact domain for striking. So it’s important to strike where the collision point has a suitable distance from the body.

A fair distance will give a better understanding of the shot. Players will also have to manage their timing concerning the incoming ball. Keep the racket in the direction of the net. Your racket’s upward movement will do the job.

Acceleration of the racket in the forehand can mainly overcome the whole match just with a perfect optimized strike. If you have already prepared your body’s angling and position and racket for the throw, then it’s time for a bit of acceleration here.

How can you get it? It’s quite simple, the right timing of body movement that gets together with the startup and racket placement on the edges can give exactly what you want.

Moreover, simply the required thing here is the rotating movement of the player’s hips and the starting lag of the racket. The combo impact of hips rotation will evenly oppose the gravity coming on the way of the racket. Plus, it will let you have a more accelerating shot as compared with the normal ones.

Getting toward the ball’s direction means the stroked ball has a brushed impact which can be confusing most of the time. Even some players brush the ball with irregular patterns to follow, which makes a disturbance.

However, you can just get engaged with the ball by compressing it a bit during the stroke and then enlarge the method, aka compress and roll approach.

This spinning pattern will let you have much more control over the ball rather than performing brush impact. Plus, you can also accelerate the moving position of the ball by following this technique in an aligned pattern that you’ll deliver.

After contacting the ball, all you have to do is get (swing) the ball in the precisely straightforward direction. And the roll approach technique will let you hit the ball with acceleration. In the meantime, you have to aim at a point where you are going to swing the ball.

Related
Why is Bingo a Part of UK Ladies Pop Culture

Contacting the ball will let you have a precise aiming scenario on where you are going to hit the ball after the strike. Now think for a while; this quick effort of the arm will then require a relaxing moment that you’re going to provide in follow-through.

After striking the ball, simply leave your arm to move means letting it get into the exact direction you have stroked the ball. In the meantime, also let the racket smoothly get through the sides of the arm for getting enough room for relaxation.

The relaxing moment of the arm will also let you regain the accelerating power for the next shot. Plus, this direction will help you keep an eye on the ball while your body will maintain a balanced position.

Q.  What are the 7 steps to the forehand?

Q. Who has the best forehand in tennis?

Q. What is a forehand stroke?

As part of a tennis forehand, the dominant hand faces forward with the inner edge of the palm facing forward when one swings the racket across the body, the ball lands in the direction desired by the player.

Q. When would you use a forehand stroke?

To learn to play tennis, you must learn the forehand, which is the most commonly used stroke. A forehand stroke should be performed using a player’s dominant hand, which should remain on the racquet’s bottom. Starting a rally requires the backhand as well as the forehand. At last, now we can surely say that we have briefly explained the best steps to take for a powerful forehand. But yes, you do need top-rated tennis vibration dampeners to minimize the jerks while making forehand shots. Alongside, a few other tricks share here that will thoroughly assist you with how to make the angling and position of the body.

The players can learn from here how to lag the racket and keep the follow-through method with the right grip. Plus, the back swinging method is also given here, together with the acceleration of the strike to play for a winning match.