The 43rd edition of the German Football League is here. The GFL started its journey on 21 May 2022 and is expected to close the curtain on 2 October 2022 with the German Bowl.

Let’s check out everything about GFL Football here and learn how to live stream it online and on TV.

The regular season of the GFL 2022 started on 21 May and is expected to end on 28 August 2022, followed by the play-offs. The season will conclude with the German Bowl, held on 2 October 2022 in Frankfurt.

GFL Football is the German Football League. It is the top-level American Football competition in Germany. The GFL marks its 43rd edition this year in 2022.

The GFL, formerly known as the American Football Bundesliga, started its journey in 1979. 12 teams played in the competition until 2011. Then, it was changed to 14 teams and further changed to 16 teams in 2012.

GFL Regular Season consists of North and South Conferences, each with 8 teams. Teams of the same Conference will play 2 matches with every other team, a home, and an away match.

4 teams will qualify for the semi-finals of the playoffs. After that, the best two teams will play in the GFL Championship, known as the German Bowl.

The start of the 2022 season is scheduled for the weekend of May 21 and 22. Afterward, the regular season goes on until the weekend of August 27 and 28. The playoffs will then begin on the weekend of September 10 and 11, with the German Bowl XLIII planned for October 2 at Deutsche Bank Park in Frankfurt am Main. 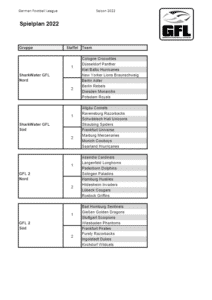 Which teams are playing in the North Conference? 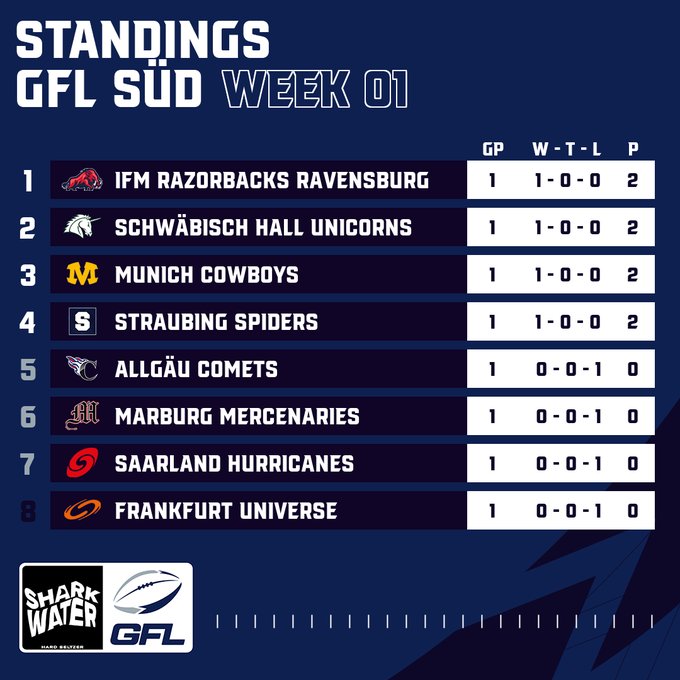 Which teams are playing in the South Conference?

Who are the defending champions?

Dresden Monarchs are the defending champions of the GFL. They won the German Football League in season 2021 for the very first time.

The Monarchs finished the regular season at the top of the table. They beat the South Conference No. 1 Schwabisch Hall Unicorns in the German Bowl by 28-19 points to lift the title.

This season, Dresden Monarchs are playing in the North Conference to defend their title. They lost their opening match against Potsdam Royals to sit at 6th in the table.

Here are the GFL German Bowl Winners of the Last 5 Seasons:

Who have the most number of titles in the GFL?

New Yorker Lions have the most titles (12) in the GFL. They are playing the GFL 2022 in the North Conference. The Lions drew their opening match against Kiel Baltic Hurricanes to sit 5th in the table.